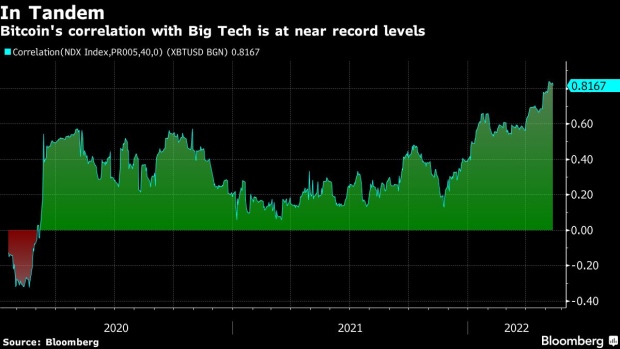 Even by the white-knuckle standards of the cryptocurrency universe, it was a standout week.

An algorithmic stablecoin called TerraUSD crashed from its dollar peg when the complex mechanism designed to ensure the link suddenly turned against it, sucking even the biggest digital assets into a vortex of panicked selling. Terms like “death spiral” entered the vernacular.

By mid-week, the turmoil briefly dragged down the $80 billion Tether stablecoin — a giant of the market and a key cog in many transactions — prompting its issuer to reassure investors that all is well. Exchange-traded products linked to crypto also got hammered, with one tracking the troubled Luna token dropping 99% in a single day.

On Friday, a semblance of calm had returned to crypto markets. But the tally was still steep, with some $270 billion of cryptoasset market value lost, according to CoinMarketCap, in the most volatile week for Bitcoin since October. Add to that the broader question: What other corners of the crypto universe might soon unravel and cause a market meltdown like this one?

“The ramifications for the space and what we’ve learned post-mortem are significant and vital lessons as we go forward,” Mati Greenspan, founder of crypto research firm Quantum Economics, wrote in a newsletter published late Thursday.

Despite jumping as much as 8.4% on Friday, Bitcoin is still down 11% over the past five days, while the second-biggest token Ether has lost 20%. Smaller so-called altcoins have taken even bigger hits. Luna, the token that was supposed to help TerraUSD maintain its peg, has lost almost all of its value.

As the chaos surrounding TerraUSD (UST) deepened, the Terra blockchain that underpins it stopped processing transactions for the second time in less than a day. Terraform Labs said in a tweet from their verified account that validators, the entities responsible for verifying transactions on the blockchain, took the step to “come up with a plan to reconstitute” the Terra network.

“We were shocked to see that a platform as huge as Terra was shut down. This is unprecedented,” said Mihir Gandhi, a partner at PwC and leader of its payments transformation business in India. “The world of stablecoins looks worrying.”

More traditional stablecoins like Tether, USDC and Binance USD — which hold dollar equivalents and other reserves in support of their pegs — were trading on par with the greenback on Friday, suggesting UST’s collapse has yet to erode confidence in such tokens. Yet regulators have taken note of the episode and are vowing to step up oversight.

There are other challenges facing cryptocurrencies, not least their tendency to trade more and more like technology stocks. Bitcoin’s 40-day correlation with the Nasdaq 100 index currently stands at 0.82, close to a record, data compiled by Bloomberg show. A correlation of 1 indicates that two assets trade in perfect unison; a reading of -1 means they trade in opposite ways.

The tighter link with equities has undermined the argument that cryptoassets are a good diversifier in times of stress. Instead, they are getting dumped along with other asset classes in an environment of tightening monetary policy.

Federal Reserve Chair Jerome Powell on Thursday reaffirmed that the central bank will probably raise interest rates by half a percentage point at each of its next two meetings, and that it could possibly go further. Powell, who is trying to tame the fastest inflation in four decades, acknowledged in an interview with the Marketplace public radio program that the Fed should have moved earlier.

Edward Moya, senior market analyst at Oanda, said in an email late Thursday that Bitcoin’s drop below $30,000 had created a “key entry point for many institutional investors.”

“Confidence has been waning in the cryptoverse but it seems we are getting close to the end of the market selloff,” he added. “Bitcoin has rebounded from $25,424, but this won’t last if risk appetite does not stabilize soon.”