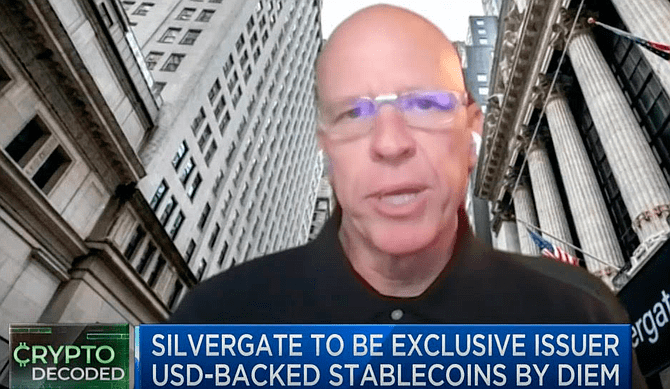 Alan Lane: “We would expect that the distribution for that Stablecoin would largely happen through our existing customers.”

Meta, formerly known as Facebook, is ditching its once-vaunted entry into the wild world of cyber currency, unloading the mystically named Diem Association to a subsidiary of a small La Jolla bank.

The heavily touted project was revealed back in June 2019. The Libra Association, as it was first called, was supposed to form the heart of an alternative financial system to compete with conventional cash-based money.

“It feels like it is time for a better system,” Facebook’s blockchain technology research chief David Marcus told the New York Times. “This is something that could be a profound change for the entire world.”

‘We have worked with regulators, central bankers, elected officials, and various stakeholders around the world to determine the best way to marry blockchain technology with accepted regulatory frameworks.

But repeated blasts of techno-verbiage never convinced skeptical regulators, and Meta has finally thrown in the towel, per a January 26 account by the Wall Street Journal, “selling its technology to a small California bank that serves bitcoin and blockchain companies for about $200 million.”

The buyer is Silvergate Capital Corp., according to the story.

“We leverage our technology platform and management team’s expertise to develop solutions for many of the largest fintech and digital currency companies and investors around the world,” says the website of the firm, founded in 1988. The bank’s chief executive officer Alan Lane has been at the helm since 2008.

“At the time, he had been reading about bitcoin and how it might disrupt banking, an industry he had grown to love and started working in when he was a student at San Diego State University.

“Because of what’s known as ‘distributed ledger’ technology, people could theoretically become their own banks, without the need for third parties, he found out.”

In addition to Silvergate’s early involvement, Libra and the subsequent Diem venture boasted the participation of Visa, MasterCard, Uber, Lyft, eBay, Spotify, according to a June 18, 2019, ArtsTechnica account.

But the big corporate guns started dropping out as regulators began questioning Facebook’s plans to get into the cryptocurrency business.

Silvergate “had earlier reached a deal with Diem to issue some of the stablecoins—which are backed by hard dollars and designed to be less volatile than bitcoin and other digital currencies—that were at the heart of the effort,” said the Wall Street Journal report.

The arrangement failed to ease regulator fears, says a May 12, 2021, Wall Street Journal story. “Switzerland’s former president declared in late 2019 that plans to back Libra with a basket of currencies were unacceptable, and that the project, ‘in this form, has thus failed.'”

“Diem was effectively doomed from the start, the people familiar with the effort said,” according to a Washington Post January 28 account. “Foreign governments, members of Congress and regulators expressed fears about the project immediately, saying Facebook wasn’t prepared to address concerns about money laundering, consumer protection and other potential financial risks.

“Two years later, after a re-branding to Diem and an overhaul of the project’s design so that it would be pegged to the U.S. dollar to create more stability, it faced even greater resistance from regulators, who said the company acted arrogantly, according to one of the people.”

The Register reported January 27 that La Jolla’s Lane wasn’t talking about the latest turn of events, “possibly because negotiations were still underway – but affirmed that the company still sees a business opportunity to provide Stablecoins – digital tokens tied to the US dollar – which was why the firm hooked up with Diem last year.

“We intend to be the issuer of a US dollar-backed Stablecoin, and we would expect that the distribution for that Stablecoin would largely happen through our existing customers, as well as new potential customers that have retail distribution,” Lane was reported to have said.