2021 is the year of institutional crypto adoption 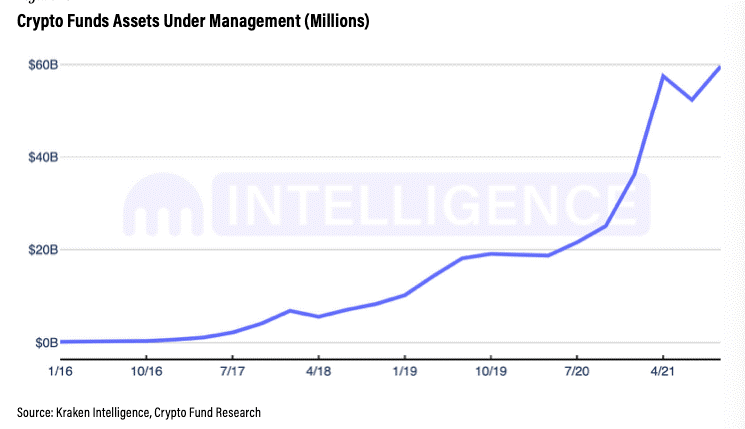 Despite the volatility that the crypto market experienced in 2021, this period proved to be a positive year for almost every aspect of the burgeoning industry. Over the past year there have been a number of important developments that have propelled the adoption and success of the entire crypto market. Meanwhile, there were also many developments that slowed down the market growth and faced losses for the participants.

However, none of these events appear to have slowed the pace of organizational adoption. According to Kraken Intelligence’s Cryptocurrency Review 2021 report, last year was clearly the industry’s best year in terms of institutional adoption.

“Not only have more financial institutions and corporates gained access to this asset class, but it has also increased inflows from existing and newly launched crypto investment vehicles.”

As the market capitalization of the crypto industry grows, so does the number of crypto-specific mutual funds looking to capitalize on the growing market. These funds’ assets under management (AUM) increased from $36.25 billion in January 2021 to $59.6 billion in October 2021, or 64.4%.

AUM of Crypto Funds in 2021 | The source: Kraken intelligence

Kraken Intelligence notes that the year-to-date increase in AUM is largely due to legacy financial institutions and investors investing directly in crypto funds. In 2021, NYDIG raised $100 million from Liberty Mutual Insurance, the third largest insurance provider in the United States, and a group of other organizations. Fidelity Investments has acquired a $20 million stake in leading US bitcoin mining company Marathon Digital Holdings.

Big investments like this come after the total number of crypto-focused funds rose to 851 from 804 in 2020. According to Kraken Intelligence, most of them are hedge funds rather than venture capital.

In 2021, some of the largest global financial institutions have given the green light to many large-scale and valuable digital currency-related activities. BlackRock, one of the largest investment management groups in the world, has authorized two of its funds to invest in Bitcoin. Legacy investment banking giant Morgan Stanley began offering clients access to Bitcoin funds, while Chief Investment Officer BNY Mellon said it would hold and transfer Bitcoin on behalf of its clients. Anti-Bitcoin sentiment at JP Morgan has also taken a turn for the better over the past year as they became the first bank to launch an internal BTC fund for wealthy clients.

Hedge fund giant Point72 looks to invest in crypto, while Harvard, Yale, and Brown foundations have been buying bitcoin since 2020.

the group Dive into crypto first

This was followed by an equally ambitious push by the world’s largest companies, who also began adding Bitcoin and other cryptocurrencies to their balance sheets. According to Kraken Intelligence, this is part of a broader treasury management strategy that most companies have put in place to reduce exposure to the US dollar, protect against inflation and seek new returns.

No wonder MicroStrategy is the clear winner in this category, buying another 50,000 BTC in 2021. According to Kraken Intelligence, public companies hold just over 1.46 million BTC, which is 7% of the 21 million bitcoin supply.

After MicroStrategy comes Tesla, which has the second largest Bitcoin balance sheet at 43,200 BTC in 2022. Square, the payments company founded by Jack Dorsey, holds more than 8,000 BTC, while Marathon Digital Holdings owns 7,453 BTC. Alongside Tesla and MicroStrategy, the category is dominated by mining companies and crypto-focused mutual funds.

However, the trend of companies accepting bitcoin goes even beyond accounting.

More and more companies have started integrating crypto-related products and forms of payment into their business over the past year. Mastercard, one of the largest payment processors in the world, has announced plans to introduce crypto payments to merchants. Competitor Visa also rolled out USDC payments on its network and partnered with more than 50 crypto companies to bring crypto to its users.

Both PayPal and Venmo are adding support for purchasing crypto to the platform, allowing hundreds of millions of users to pay for goods and services with crypto.

In its report, Kraken Intelligence found that adoption rates from both legacy financial institutions and large corporations determined overall market volatility. The company concluded that the way forward for the crypto space looks promising.