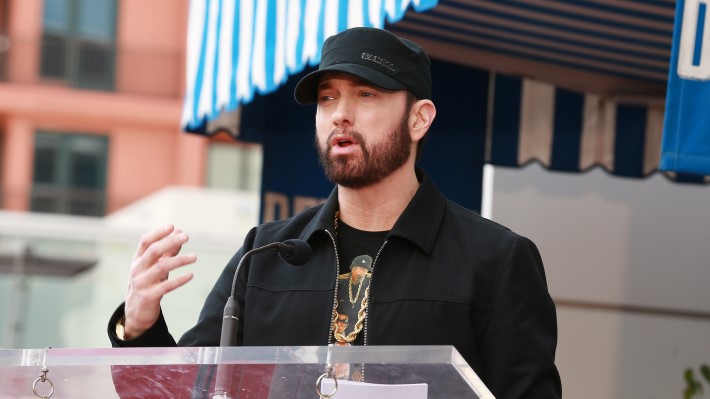 In addition to getting heavily into the NFT game, making $2 million from a collection including action figures and comic books, Eminem has been finding new ways to leverage the popularity of his catalog. From partnering with Peloton to use his music in focused workouts to popping up on Dr. Dre’s upcoming Super Bowl Halftime Show, Em’s building a brighter future by trading on his ironclad legacy.

His next endeavor will more directly utilize his older music, as he announces a limited-edition vinyl release of his albums for Interscope’s 30th anniversary. Interscope has been Em’s label home for nearly the entirety of his career, so it’s fitting his dusting off all his Interscope-released albums for this release, and to make it extra special, he’s brought pioneering visual artist Damien Hirst on board to reimagine the covers with his psychedelic designs. Eminem will also be signing these redesigned covers to make each one a little more unique. Meanwhile, Hirst is fresh off designing Drake’s Certified Lover Boy cover, which drew polarized responses from fans, but that’s unlikely to affect demand for his work with Eminem.

The vinyl will be offered on NTWRK beginning January 27 through January 31 — although they’re unlikely to last all that long. The profits from the vinyl sale will be donated to building a school in South Los Angeles. You can check out Hirst’s covers below.