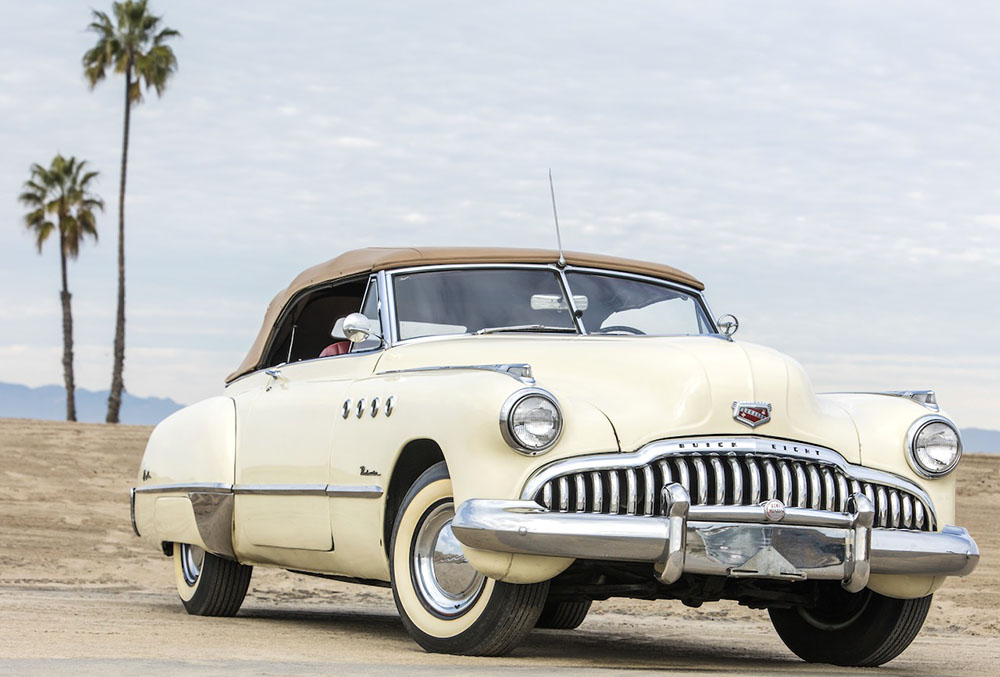 Late January marks the official kick-off to the collector car sales season, with the major auction houses sponsoring events in Scottsdale, Arizona. Interest is particularly high this year for a trio of celebrity sales: Dustin Hoffman’s 1949 Buick Convertible, which made a star appearance in Rain Man; an over-the-top yet under-appreciated 80s Italian supercar owned by—and named after—famed music producer and soundtrack composer Giorgio Moroder; and a diverse collection of ten vehicles from the estate of the late director and producer Richard Donner.

Last year was a record year for enthusiast car sales, with more than $2 billion in sales happening at in-person and online auctions alone. “Scottsdale auction week is where we’ll find out if this momentum is going to continue,” says McKeel Hagerty, CEO of collector car conglomerate Hagerty. “We predict $211 million in sales there between now and Sunday evening.”

Celebrity provenance can add significant value to a vintage vehicle. “It’s people who give value and meaning to cars,” says Hagerty. “Celebrity influence on vehicle values correlates to the staying power of the specific celebrity or film.” Some cars also benefit from their own turn in the spotlight, having found their way into screens themselves.

And then there are the cars that tick both boxes, such as the following.

After the Rain Man shoot wrapped, in the late ’80s, Hoffman decided that he wanted to purchase one of the two 1949 Buick Roadmaster convertibles used in the filming of the movie. Hoffman has owned the car ever since. Director Barry Levinson bought the other one.

The Roadmaster is practically a co-star in the movie. “The car had a very strong visual presence in the film and was featured throughout,” Levinson said in a statement to Bonham’s auction house, which is handling the sale of the car on Thursday, Jan. 27. “It became a character. Dustin, Tom Cruise and the ’49 Buick. In essence, the car had ‘third billing’.” Hoffman’s character, Raymond, describes the car in the movie, in his character’s idiosyncratic rapid-fire delivery: “It’s a 1949 Buick Roadmaster straight eight, fireball eight. Only 8095 production models.” His repeated insistence that he is an “excellent driver” of the Buick has become a classic quote.

Roadmasters from that era sold for just over $3,000 back when they were new (the equivalent of about $33,000 in today’s money.) The best ones in the world—those deemed in #1 or Concours condition by Hagerty—are worth $135,000. Bonham’s has set the top-end of his pre-sale estimate at $250,000, though fevered bidding could push the price far higher.

“Movie cars create a big impression on a lot of people. At auction, they typically sell for five times what an identical vehicle without screen time would go for,” says John Wiley, manager of valuation analytics for Hagerty. “With this Buick starring alongside two superstar actors in a highly-recognized film, and having later been owned by one of them, it could sell for well more than its high estimate.”

At the height of his fame, in the 1980s, Italian composer Giorgio Moroder (who produced hits by Donna Summer, Blondie and Barbra Streisand and wrote scores for American Gigolo, Flashdance and Top Gun) helped fund the development of a supercar named after him.

To say that this vehicle was outrageous would be an understatement. Because it packed a 16-cylinder engine (really, two Lamborghini V8s melded together) horizontally into the space behind the driver, it was among the widest supercars ever built. It hosted not just two pop-up headlamps, an ’80s hallmark, but four. The 6.0-liter motor delivered a purported 540 hp, besting competitors from Ferrari and Lamborghini. And its side-straked body resembled louvered ’80s shutter shades sunglasses.

The car was to be called the Moroder-Cizeta. As with many boutique startups, things went wrong almost immediately. Disagreements over how, where and out of what materials to manufacture the car degraded the connection between Moroder and his partners—mainly Lamborghini designers without much business experience. Costs skyrocketed, and orders were limited. Moroder pulled out of the deal. Thus, the handful of cars that were eventually produced and sold (for prices in the mid/high-six figures) were simply called Cizetas.

Only the prototype car sported the Cizeta-Moroder name.

This is the car that RM Sotheby’s is putting up for sale on Jan. 27, with a pre-sale estimate of $900,000 – $1,200,000. In addition to the car, the winning bidder will also get an NFT for an exclusive four-track Moroder EP, a 3D rendering of the car from digital artist “Soulajit”, and other memorabilia.

“The Cizeta-Moroder, in our view, is an interesting case,” says Wiley. “Its value isn’t tied to significant pre-production or post-production celebrity or notoriety. It’s known for exactly what it is: A dream car built smack-dab in the middle of the ‘poster-car’ era. And analog supercars from this era have been hot.”

Richard Donner died last year at the age of 91. In addition to being a prolific director (The Goonies, Superman, the Lethal Weapon franchise) and producer over a six-decade career, he was also a consummate collector of vehicles. Ten of his cars are being offered for sale by his estate. While they are all quality, drivable vehicles, none is estimated by Gooding & Co., which is handling the sale on Jan. 26-28, to sell for more than $180,000. Many are projected to hammer in the low five-figure range.

The most valuable in the group is a 1965 Porsche 356 SC Cabriolet, from the highly desirable final year of production for Porsche’s first passenger vehicle. A sextet of other convertibles—all American—are also part of Donner’s horde. These include a buttercup yellow 1931 Ford Model A, a Raymond Chandler–esque burgundy 1939 Ford Deluxe Phaeton, a wood-trimmed 1948 Chrysler Town and Country, a sinister black 1957 Cadillac Eldorado (Donner’s personal favorite), an ivory and turquoise 1958 Lincoln Continental and a heavily chromed and cherry-red 1962 Crown Imperial.

Perhaps the most fun is a two-tone 1962 VW Microbus, a covetable 23-window model with a retractable canvas roof. Coincidentally, the Donner sale includes another 1949 Buick Roadmaster, the same year and model as the Hoffman Rain Man car but bodied as a station wagon.

“The Donner collection is an especially desirable set of cars. Despite them being owned by a successful filmmaker, none have screen time, nor was Richard Donner public about being a car enthusiast,” says Wiley. “We expect these cars to succeed on their own merits more so than on their ownership history.”