Business Students Prove Their Worth in Bloomberg Trading Challenge 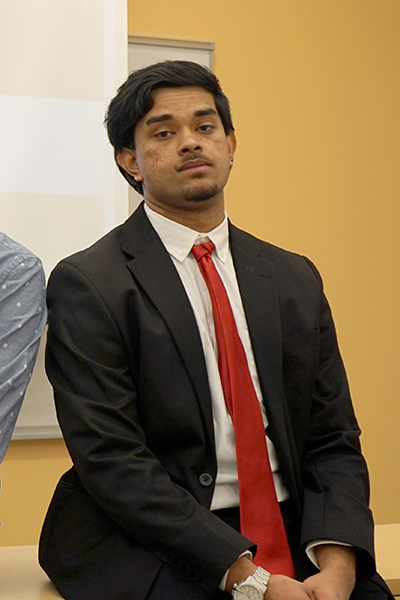 When Elon Musk polled his Twitter followers last November about selling 10% of his Tesla stock, the Manning School of Business students competing in the 2021 Bloomberg Trading Challenge knew they had to act fast.

Like many of their competitors in the seven-week simulated investment contest, the UMass Lowell team of Thomas Stranberg, Anirban Dasgupta, Toney Benny, Yeaharne Hout and Matt Conte had been enjoying nice returns from the electric vehicle maker.

But their strategy for the challenge, which has college teams invest an imaginary $1 million using the Bloomberg Terminal market data and analytics system, was based on following the news and current events. Musk’s tweet got their attention.

“We were like, ‘OK, if he’s going to sell, we should too,’” says Hout, a senior finance student from Lowell.

By getting out before Tesla stock tumbled 12%, the UML team vaulted to No. 4 in the competition’s weekly U.S. standings — and to No. 7 out of nearly 500 teams competing from around the world.

The River Hawks took a dip in the last week of the competition, but they still finished 39th in the final global standings, placing them in the top 8% overall. Not a bad showing for the Manning School’s first entry in the competition.

“We didn’t stay as high as we were hoping to, but we did really well,” says Stranberg, a senior finance student from Sudbury, Massachusetts, who helped organize the team.
“The students put a lot of work into this, and to finish in the top 8% is huge,” says Business Dean Sandra Richtermeyer. “I loved watching the website and seeing their progress each week.”

Started in 2017, the competition has several ground rules. Teams can’t have more than 20% of their portfolio in any one investment. They can’t short a stock, betting that the asset will drop in price. And their returns are rated against the Bloomberg U.S. Large Cap Price Index, a benchmark of the 500 most highly capitalized U.S. companies.

The UML team beat the Bloomberg benchmark by $146,000. The challenge winners, a team of graduate students from the University of Connecticut, surpassed the benchmark by nearly $470,000.

The River Hawks benefitted from the cryptocurrency craze, investing in mutual funds that carry cryptos such as Bitcoin and Ethereum.

“October was a good month for crypto,” says Benny, a senior computer engineering major (and business minor) from Waltham, Massachusetts, who has been investing in cryptocurrencies for the past five years.

Benny, who struck up a friendship with Stranberg during his freshman year over their mutual interest in cryptocurrency and blockchain, says competing in the challenge was a good way to make new connections and gain experience with Bloomberg Terminals.

Like his teammates, Conte has done some trading on his own in recent years, using platforms such as TD Ameritrade and Robinhood.

“But it was a good experience working on a team to decide what to purchase,” says the senior finance student from Haverhill, Massachusetts.

As a customer relations associate intern at Fidelity Investments last summer, Hout invested her wages into “safer” stocks like Apple. She says she came away from the Bloomberg Challenge “knowing that stocks are way more volatile than I thought.”

The team set up a group chat to discuss their trades, which were executed by Dasgupta — the only member of the team who was not a senior.

“We have such great resources available” in the Trading Room at the Pulichino Tong Business Center, says Dasgupta, a sophomore finance student from Westborough, Massachusetts. “We feel extremely lucky to make it as far as we did.”

The team’s advisor, adjunct faculty member Carolyn Kedersha, says the students’ performance validates what they’re taught each day by her colleagues in the Finance Department.

“The reason they did so well is because of the time spent turning the students’ interest in finance into skills and abilities,” she says. “It was a wonderful experience.”