How to understand blockchains’ environmental impact 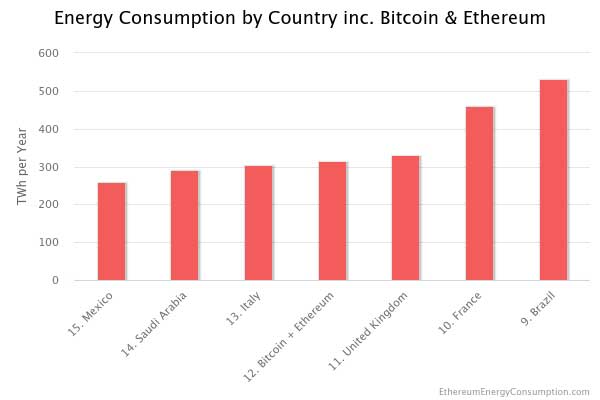 Generally, people know that blockchains consume huge amounts of energy but the reasons why and how to reduce it will be key to discussions of blockchain-based applications and Web3 in a time of climate crisis.

It is no longer controversial to say that economies, businesses, and technology must try to reduce their emissions to net zero as soon as they can if humanity, as a species, is to avoid ecological devastation and the social and political chaos that will unleash.

And yet, almost ironically, a technology is going mainstream that appears to consume as much energy as it’s feasibly possible to consume. Single transactions use the same amount of energy as an American household would use over months.

These transactions are now becoming a more and more important part of the marketer’s world, as brands start to get involved with digital tokens (NFTs) and begin to think about the possibilities that blockchain technology holds for them.

We need to understand what’s happening and what to do about it before investing in gimmicks that quite literally cost the earth.

Why so much energy?

Cryptocurrencies on a blockchain (distributed database) are more than wildly speculative markets, they are – at least theoretically – both a store of value and a payment technology.

But it’s that last part, the payments, where cryptocurrencies tend to suck and that’s because each time a transaction is made, consensus must be established all across the distributed database (or at least 51%, for security reasons) through what is known as Proof-of-Work. By transaction, it’s also important to note that this also includes minting or transferring an NFT.

The difference between traditional payment networks like VISA and Mastercard and the blockchain is that the banks use their own enterprise-level infrastructure, which means a concentrated market but a faster user experience. On a blockchain the infrastructure is distributed, delegated to ‘miners’ all around the network. Nobody ‘owns’ the technology, so to speak.

Miners are responsible for processing transactions and adding them to the blockchain. These are super-users who compete for the processing work by attempting to complete the mathematical problem (a cryptographic puzzle) faster than everyone else. In return for this processing, the winner gets some currency back. Since it’s not a person with a calculator performing the calculations, this all comes down to the most powerful computer processor exerting the greatest amount of effort.

They also help to defend against attacks on the network. One of the main forms is a Sybil attack, which is when the attacker creates many artificial identities (more than 51% of the network) to skew the majority’s decision on whether a transaction has taken place.

It’s a lot of energy

The widely cited Bitcoin/Ethereum Energy Consumption Index by Digiconomist pegs the monumental environmental impact of a transaction on each, using countries and households to explain the huge numbers:

Taken together, both these blockchains use major economy-amounts of energy, just ahead of Saudi Arabia and Italy and just behind the United Kingdom. It would be the 12th most consumptive economy on the planet.

2022 is set to be a transitional year for blockchain technologies as one of the biggest, Ethereum, makes a switch from Eth1 (proof-of-work) to Eth2 (proof-of-stake). As of yesterday it has been renamed to the execution layer and consensus layer to reflect the fact that it is an upgrade through merging rather than replacement.

A shift to proof-of-stake (PoS) is a major change but Ethereum hopes that it will make its blockchain both safer to use and far less energy-intensive. It’s not just Ethereum 2, other major PoS networks include Polkadot, Cardano, and Tezos among others.

Proof-of-stake blockchains are a newer generation that realised that their predecessors had a limit on their scalability, and instead use a network of ‘validators’ – senior users for want of a better term – who will stake their own cryptocurrency in exchange for the ability to validate a transaction in exchange for a reward.

Effectively, the resource of energy is replaced by capital. However, as a piece of research from UCL’s Computer Science department into post-PoW blockchains’ energy consumption shows, these systems can vary widely.

As the UCL research shows, while using far less energy than proof-of-work (PoW) network Bitcoin (relative to the amount of transactions the network can perform at any one time), all the proof-of-stake networks use far less energy – two to three orders of magnitude less than Bitcoin.

While the researchers note that this is a working paper and that the results will be updated, there are very positive signs.

“Our work shows that PoS-based systems can contribute to [the challenges posed by climate change] and could even undercut the energy needs of traditional central payment systems, raising hopes that DLT [Distributed Ledger Technology, i.e. a blockchain] can contribute positively to combatting climate change.”

What to do about it

While the market is very hot at the moment with chatter about Web 3.0 and NFTs rampant, the technology is in a transitional phase. It’s important to be picky and critical of the underlying processes. In light of a climate crisis this is not a neutral technology.

However, it is not simply a wasteful technology. As the underlying technology becomes more sophisticated, its applicability and usability will likely increase. It’s time to get interested, but not time to put all your eggs in one basket.