US 10-year bund yield back at zero percent: What are the drivers? 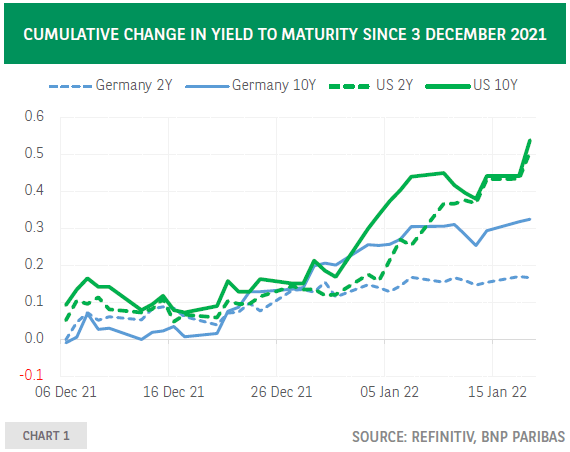 For the first time since May 2019, 10-year Bund yields have moved back in positive territory. Three factors explain this development. Firstly, the traditional international spillover effect of developments in the US Treasury market where following a more hawkish tone from the Federal Reserve, yields have been on a rising trend since early December 2021. Secondly, markets are pricing the end of PEPP and the tapering of net asset purchases by the ECB. Finally, there is the prospect that, at some point, the ECB will raise its policy rate. Bond markets in the US and Germany have become highly correlated since 2021. This is an important factor given the imminent start of a rate hike cycle in the US and its possible influence on Treasury yields and, by extension, yields in the euro area. It has been a long wait but on 19 January, for the first time since 7 May 2019, 10-year German Bund yields moved back into positive territory. In a country where consumer prices rose by 3.1% in 2021 on an annual average compared with 20201, bond investors will still feel very frustrated, although slightly less so than before.

In recent years, nominal bond yields in advanced economies have been low for various reasons. There has been a trend decline in the neutral or natural rate of interest2. Although this is a short-term rate of interest, it has pulled along long-term rates as well. Years of low inflation have weighed on market-based inflation expectations. Inflation below target has forced central banks to adopt an expansionary monetary policy.

In the euro area, the negative deposit rate and QE have pushed down the term premium3 and hence government bond yields. Turning to the recent increase in yields, both external factors, as well as developments related to the euro area, have played a role. The former concerns the change in the monetary policy outlook in the US, which has caused an increase in US Treasury yields. Chart 1 shows the cumulative increase in yields since 3 December when the yield on the 10 US Treasury notes had reached a bottom4. Interestingly, the rise in 2- and 10-year yields is about the same. The increase in the real yield on 10-year Treasury inflation-protected securities (TIPS)5 is of the same order of magnitude as that of the nominal bond of the same maturity – respectively 49 and 54 basis points –, implying that market-based inflation expectations have been rather stable over this period.

Nominal bond yields not only correspond to the sum of a real yield and market-based inflation expectations but they can also be decomposed in a risk-neutral yield – which reflects the expected evolution of short-term interest rates, which in turn are influenced by monetary policy expectations – and a term premium. Since 3 December 2021, the latter has increased 33 basis points and the former 21 basis points6. The two decompositions suggest that the rise in yields reflects a combination of expectations of a tighter monetary policy – triggered by statements of Federal Reserve officials as well as the decisions and minutes of the December meeting of the FOMC – as well as a higher term premium, with inflation expectations have been more or less stable.

Over this same period, German yields have also moved higher. The 10- year Bund yield rose more than the yield on German 2-year paper – 33 versus 17 basis points –, implying a steepening of the yield curve. Like in the US, the increase in the yield on inflation-linked bonds – 30 basis points – was similar to that of nominal bonds, implying stable inflation expectations.

The rise in 2-year yields reflects an expectation that the ECB will end up tightening policy. The steepening of the German yield curve suggests that the yields on long maturities have also been influenced by other euro area-specific factors such as the announcement that net purchases under the PEPP will end in March and will only be followed by a temporary increase under the traditional asset purchase program. The combined decisions on the PEPP and the APP imply a tapering of asset purchases, which may have exerted upward pressure on bond yields. Another reason is the spillover effect from higher US Treasury yields. Chart 2 chart shows the beta coefficient of regression with the weekly change in 10-year US yields as explanatory variable and the weekly change in 10-year German yields as dependent variable7. Chart 3 shows a similar calculation for 2-year rates. It is worth noting that the 10-year yield beta is higher than the one for the 2-year yield. This reflects that the latter is more influenced by the monetary policy outlook, which at present is very different between the Federal Reserve and the ECB.

In both cases, the beta coefficient has recorded a strong increase since last year, reaching the earlier post-global financial crisis highs. It shows that bond markets in the US and Germany have become highly correlated. This is an important factor given the imminent start of a rate hike cycle in the US and its possible influence on Treasury yields and, by extension, yields in the euro area.