ETH and BTC plunge as the cryptocurrency unraveling continues 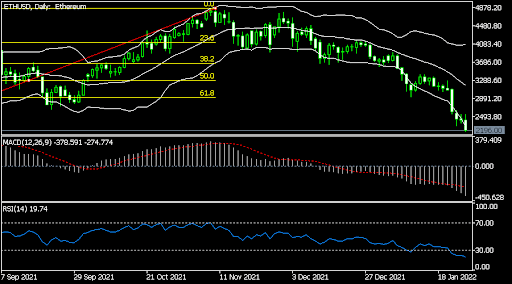 The relentless cryptocurrency sell-off accelerated on Monday as concerns about the Federal Reserve remained. Bitcoin tumbled to about $33,000 while Ethereum fell to about $2,200. In total, cryptocurrencies have lost over $1.4 trillion in the past few months. Investors are afraid about rising interest rates ahead of this week’s interest rate decision. They are also concerned about regulations after the Bank of Russia warned about the industry. It recommended that the government should ban the currencies.

Global stocks retreated while the CBOE VIX index rose as investors reflected on the rising tensions between Western countries and Russia. The main concern is that Western countries expect that Russia will invade Ukraine. In a report during the weekend, UK intelligence officials warned that Russia was hoping to install a pro-Russian leader. Meanwhile, the UK and US government have asked their diplomats and their families to leave Ukraine while NATO members have put their forces on standby to counter Russia’s threat to Ukraine. Futures tied to the Dow Jones and Nasdaq 100 fell by over 100 points.

The ETHUSD pair declined sharply today. The pair fell to a low of 2,177, which was the lowest level since July 27th. The pair moved along the lower side of the Bollinger Bands. On the daily chart, the pair moved below the 25-day and 50-day moving averages. The Relative Strength Index (RSI) has moved below the oversold level. The MACD has also retreated. Therefore, the pair will likely keep falling in the near term.

The BTCUSD pair tumbled to a low of 33,283, which was the lowest level since July 26th. The pair formed a death cross, where the 200-day and 50-day moving averages make a bearish crossover. It has also moved slightly below the key support level at 39,558 while the Relative Strength Index (RSI) has fallen. Therefore, the pair will likely keep falling in the near term.

The EURUSD pair has been in a strong bearish trend in the past few weeks. It has moved below the ascending trendline shown in yellow. It has also moved below the 25-day and 50-day moving averages. The Relative Strength Index (RSI) has also tilted lower. Therefore, the pair will likely keep falling ahead of the Federal Reserve decision later this week.