Launching a new product used to take months or years, and one of the biggest challenges was attracting new users to try — and then pay for — the product. Hot growth SaaS stocks companies like Asana (NYSE: ASAN), Sea Ltd (NYSE: SE), and Cloudflare (NYSE: NET) are all burning tens, if not hundreds, of millions of dollars to grow. Some of that money is spent on R&D and product development, but a lot goes into sales and marketing to attract customers.

Cryptocurrency may make the idea of spending on sales and marketing a thing of the past for new companies. On the public blockchain, anyone can find any wallet they want and interact with it directly. Want to offer wealthy people a trial of your product? Just look up addresses with large transactions on the blockchain. Want to disrupt an incumbent? Simply look up their biggest and best customers and offer them your own token for moving their business over to you. It’s a simple strategy, and it may just be disrupting OpenSea’s once-apparent stranglehold on the multi-billion dollar NFT market on the Ethereum (CRYPTO:ETH) blockchain. 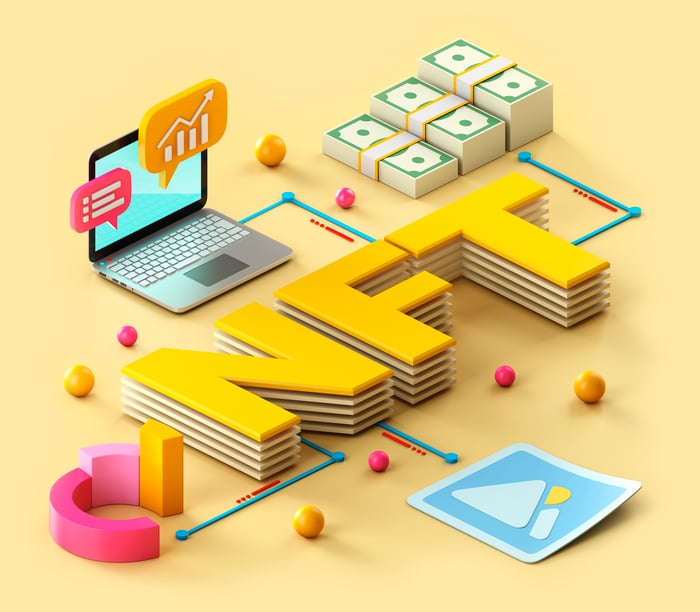 Let’s start with a few definitions.

One thing to note is that an NFT and a crypto token are both technically tokens. But typically an NFT has an image attached and is identifiable as one in a set of similar, but not identical, NFTs. Tokens are identical and act more like digital currency.

With this background, we can look at the disruption happening to OpenSea with its own data and customers.

A frontal assault on OpenSea

OpenSea is the biggest NFT marketplace today, and primarily interacts with the Ethereum blockchain. The marketplace had over $14 billion in transaction volume in 2021, and recently raised money at a $13.3 billion valuation to continue its growth. But this success has also attracted competitors.

LooksRare, a new marketplace for Ethereum NFTs, announced this week that it’s offering a token called $LOOKS to OpenSea’s users through a free airdrop. Users who have bought or sold at least 3 Ethereum worth of NFTs on OpenSea are eligible for the airdrop. Looks Rare is targeting OpenSea’s best and most active customers and literally giving them free tokens, which can then be turned to cash if users want.

There are four key elements to this airdrop that we need to understand that are so disruptive.

This is a huge change from selling other software products, which can take months or years to reach scale. Looks Rare could become an NFT marketplace giant overnight with a new token and free marketing from users.

What’s unique in the world of cryptocurrency is that developers can create value out of thin air. They can launch a token and give it to anyone they want, hoping that the token has some value in the market. In the case of the $LOOKS token, Looks Rare is giving out up to 120 million tokens, which, based on today’s price, would have about $400 million in value.

In other words, Looks Rare just gave away $400 million in tokens to potential customers just to get them to try their product. But this airdrop didn’t cost the company $400 million — the value was created from nothing, and cost almost nothing. This isn’t to say that the $LOOKS token will have value long-term, but for now it was a very valuable gift to potential customers.

How is this airdrop playing out? Overnight, LooksRare leads the Ethereum NFT marketplace in transaction volume. I will note that it appears there was a surge in what’s known as “wash trading”, or selling an asset to yourself in a different wallet (like moving money from one pocket to another), which makes the numbers skew heavily in LooksRare’s favor. But in the space of a few days there were thousands of people made aware of LooksRare, and it went from having 1/1,000th the number of hourly users as OpenSea to 1/10th the number of hourly users. 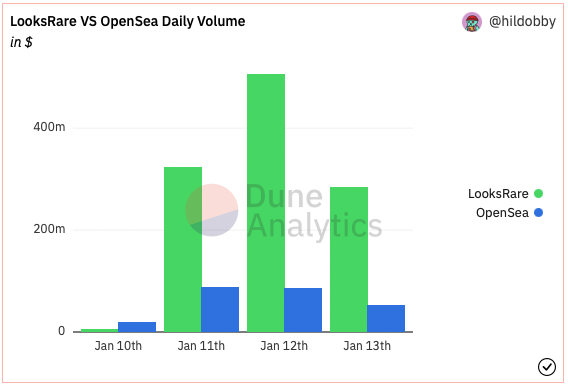 When it comes to disrupting incumbents in crypto, tokens really do change the game.

Disruption is just a token away

Just days after OpenSea raised money at a $13.3 billion valuation, a potentially large competitor made a frontal assault on its business and potentially stole a lot of the company’s customers — for free.

The competitive dynamics will truly be different in the crypto economy since transactions are transparent and asset ownership can be seen by anyone. That will make it possible for any company to scrape valuable data from the blockchain and build a business rapidly by enticing users with a free token or other giveaway. Since these items are digital, they’re essentially free — but if the market gives these airdrops value, it’s like paying customers to try your product.

This isn’t the last airdrop we’ll see from a new company, and this may be the new playbook for cryptocurrency projects. For OpenSea, it’s a reminder of just how fleeting its lead in the Ethereum market is now that the competition is a click away and armed with tokens they can give to users to switch platforms.