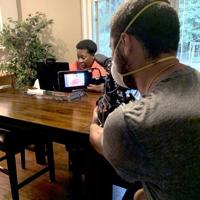 ADEL — An Atlanta-based conservation group has released a video critical of environmental issues in this Cook County town and their impact on low-income residents.

“Abandoned: Greed, Neglect and Environmental Injustice in Adel” was released on YouTube Friday by Georgia Conservation Voters, a nonprofit group.

Abraham Park, communications manager for GCV, said an online watch party will be held at 6 p.m., Jan. 20, through the group’s website, gcvoters.com.

Among the issues the 35-minute video takes to task are:

— a propane tank firm in Adel which the film claims produces foul odors and dangers from being located in a residential area;

— Efforts to bring a biomass plant into Cook County; and

— a major bitcoin “mining” facility in Cook County which the film says is a noise nuisance to neighbors. Bitcoin mining is a means of creating new “bitcoins” — a form of digital currency — by using computers to solve complicated math problems that verify bitcoin transactions.

The Valdosta Daily Times has reached out to some of the companies mentioned in “Abandoned” but has not heard back from them.

“Abandoned” Greed, Neglect and Environmental Injustice in Adel’ can be viewed at https://www.youtube.com/watch?v=uJKuTDVIqKc.

Terry Richards is senior reporter at The Valdosta Daily Times.