‘SNL’: Jason Sudeikis Returns as ‘Ghost of Joe Biden’s Past’ in Cold Open 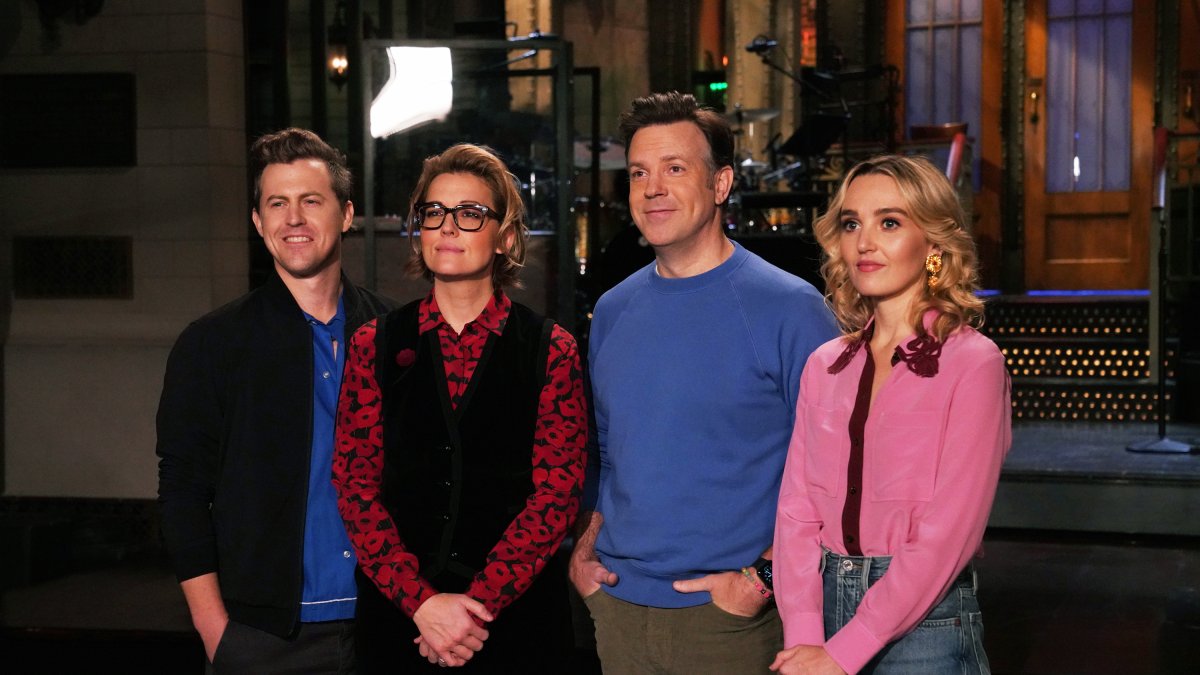 The show opened with Press Secretary Jen Psaki, played by Chloe Fineman, debriefing current Joe Biden (James Austin Johnson) about his approval ratings. “Your CNN town hall was watched by no one and your approval rating is in the dumpster.”

Biden (Johnson) gets up from his seat inside the Oval Office and ponders, “I don’t understand. People used to like me. The press would call me ‘Uncle Joe’. I miss the old me.”

Enter Sudeikis’ fun, reprised 2013 role of Vice President Joe Biden, wearing aviator sunglasses, who was the happy-go-lucky 47th Vice President at the time. “I’m you from eight years ago, man! The ghost of Biden past. Boo!” he said.

He came face-to-face with the current Biden, the President of the United States, stressing over passing the latest infrastructure bill.

“How can you be me?” Johnson’s new Biden asked. “You seem so happy, so carefree, so—what’s the word I’m looking for?”

“It is great to be back here at “Saturday Night Live”, and it is even greater to be hosting the show for my first and very last time,” joked Jason Sudeikis at the beginning of his monologue. Sudeikis was a cast member on the sketch comedy show from 2003 to 2013.

Sudeikis continued, “Now for those of you who don’t know, I worked at “SNL” for 10 years, an ‘actors dozen,’ we say. And its so neat to be a small part of this show’s amazing history: a history that was fueled for its first 25 years by cocaine and adrenaline, the next 15 years by Starbucks and unhealthy comparisons. And the last six years by…Adderall and fear.”

The “Ted Lasso” star discusses what he has been up to in recent years, most notably mentioning the success of the AppleTV+ award winning show. We somehow became a hit. It’s truly shocking to me because its built around two things Americans hate: soccer and kindness.”

Sudeikis joked how people around Studio 8H have asked him for advice, “I found myself just giving the same advice to every single person: win an Emmy. And if you can’t, win two. It sets you up for success.”

Taking a more serious tone he says, “This place changed my life, twice. Once as a cast member and writer here. But most importantly as a kid watching from home. And there’s a good chance that if you’re watching tonight, there’s probably something from this place probably changed your life too.”

While emphasizing how “historic” Studio 8H is, Sudeikis encouraged the in-person viewers to take it all in. “This room, here. To be here. This place is historic. For a second, just look around, for real. Even all you amazing people who work in the crew, just look around for a second. Think about all the brilliance that’s happened here. All your favorite sketches: “Wild and Crazy Guys”, “Gilly”, “Cowbell”, “Wayne’s World”, all happened in right here, in here, where you are.”

The first pre-recorded sketch of the night starred Jason Sudeikis poking fun at Ellen DeGeneres and her daytime talk show by playing the “male Ellen,” in “Mellen”. Cecily Strong introduces the skit with a voiceover saying, “All the fun daytime energy of ‘Ellen’, with a hard masculine edge.”

Melissa Villasenor is the little orphan Annie. Cecily Strong sings, introducing the staff (Aidy Bryant, Ego Nwodim, Alex Moffat) to her, while Sudeikis plays Ricky. It unfolds through the song that the staff isn’t exactly sure what Ricky does, as certain secrets are revealed.

Kyle Mooney and Ego Nwodim are parents meeting with the teacher (Sudeikis) of their kid, Skylar. The sketch leans into the small talk chatter and parent clichés, as Sudeikis and Nwodim begin to hit it off in front of Mooney.

Musical guest Brandi Carlile performs “Broken Horses” off of her new album, “In These Silent Days”, which is also the name of her memoir.

“President Biden admitted that he hasn’t had time to visit the southern border, though his approval rating has,” co-host Colin Jost said.

“Sen. Kyrsten Sinema, who hates the attention, says she’s opposed to raising taxes on the wealthy to pay for President Biden’s agenda,” he said. “Finally, someone speaking up for billionaires — because it’s so hard to hear them from space.”

Sudeikis brings back his character “The Devil” for Weekend Update, (the show serving as the Halloween episode), with Colin Jost asking what he has been working on lately.

“So many little side projects,” he said. “Earthquakes. Got some killer storms. Instagram for children.” Jost continues to ask if there is anything else he would like to take credit for. “Bitcoin that’s all me. Vaping, proud of that one.”