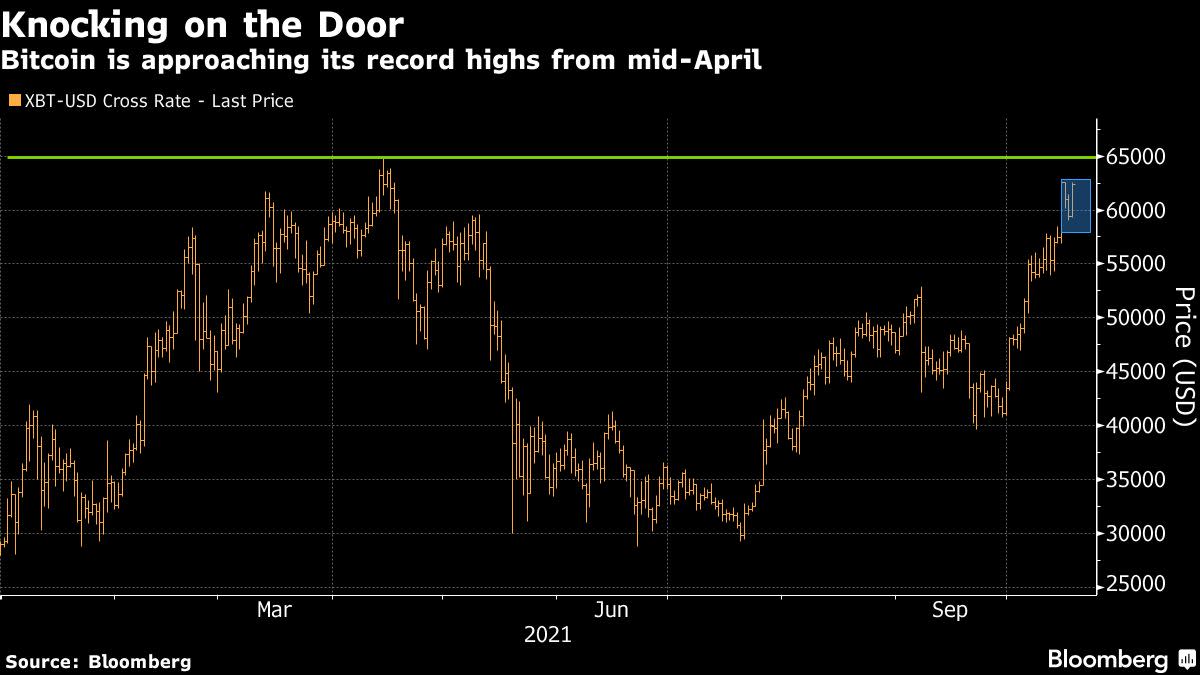 Bitcoin rallied early Monday after falling over the weekend, ahead of an anticipated U.S. exchange-traded fund approval.

The largest cryptocurrency gained as much as 5.5% and was trading at about $61,987 as of 9:03 a.m. in London. It fell both Saturday and Sunday to nearly $59,000. Bitcoin is in focus as the first futures ETF tied to the token may debut Monday, according to a filing. Major levels being watched include the $60,000 threshold as well as the April record of $64,870.

Bitcoin will probably challenge its record highs amid the ETF debut “but it won’t be surprising to see some profit taking come through around those levels as traders might look to sell the news,” said Pankaj Balani, chief executive officer of crypto-derivatives exchange Delta Exchange, in a note Friday. “Overall the volatility on Bitcoin is going to be high irrespective of how the decision plays out.”

Bitcoin has more than doubled since the start of the year, though the ride has been volatile as the market confronts narratives from increasing institutional adoption and greater asset-class maturity to a crypto crackdown in China and concerns about energy usage. Other cryptos also gained Monday, with second-largest Ether up about 4%. Binance Coin has retaken the third spot in crypto market value after a 17% rally in the past seven days, according to CoinGecko.com.

The technical setup for Bitcoin in its latest rally is a concern for Rick Bensignor, the president of Bensignor Investment Strategies and a former strategist at Morgan Stanley. Depending on Monday’s price action it might “make me think twice about buying Bitcoin now, especially as it’s against all-time highs,” he said in a note Monday.

Bitcoin’s 43% surge so far in October has pushed the crypto into overbought territory, according to relative strength index data.

However, Bensignor added that “open interest has dramatically increased on this October rally — meaning that there are lots of new shorts on this up move that are badly under water — that still may need to get fully squeezed out before the buying might dry up.”