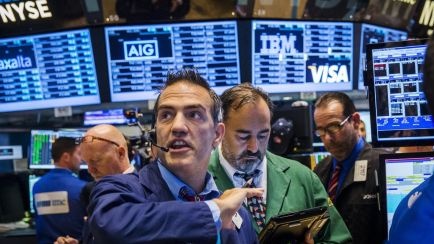 Oil prices extended a recent rally amid a global energy shortage to hit multi-year peaks, with US crude touching a seven-year high and Brent a three-year peak.

China’s gross domestic product (GDP) grew 4.9 per cent in July-September from a year earlier, the weakest pace since the third quarter of 2020, as the world’s second-largest economy grappled with power shortages, supply bottlenecks, sporadic Covid-19 outbreaks and debt problems in its property sector.

Chinese blue chips were down 1.55 per cent and the Hong Kong benchmark lost 0.54 per cent, although most of the falls came right after the bell, prior to the release of the data.

“The numbers are actually much weaker than what we thought … I think in the fourth quarter it will be even slower because we will see more impact from the energy crunch,” said Woei Chen Ho, economist at UOB.

But David Chao, global market strategist for the Asia Pacific (ex-Japan) region at Invesco, said Xi’s comments about higher taxes had been the catalyst for the stock fall, seeing grounds for optimism in the GDP data, including the stronger retail sales.

Regional benchmarks were weighed down by Chinese stocks. MSCI’s broadest index of Asia-Pacific shares outside Japan was last down 0.34 per cent, while Japan’s Nikkei lost 0.15 per cent.

Shane Oliver, chief economist at AMP, said investors also continued to worry about global inflation, which was being driven by the reopening of many economies after Covid-19 restrictions and supply chain issues.

On Monday, data showed New Zealand’s consumer price index rose 2.2 per cent rise in the third quarter, the biggest rise in over a decade, causing the local dollar to jump as much as 0.5 per cent

Some other currencies are also responding to rising inflation expectations, as investors increasingly bet central banks will have to raise rates.

The dollar edged higher against a basket of its peers to 94.11, in sight its one-year high of 94.563 hit last Monday, as traders position themselves for a looming tapering of the Federal Reserve’s massive bond buying programme.

Against a stronger dollar, sterling fell 0.2 per cent despite hawkish comments from Bank of England governor Andrew Bailey over the weekend.

The yen meanwhile hovered near its lowest in nearly three years against the dollar, as the Japanese central bank looked increasingly likely to trail behind other monetary authorities in terms of rate hikes.

Bitcoin traded at $62,300, not far from a record of $64,895 hit in April. It gained last week on hopes that US regulators would allow a cryptocurrency exchange-traded fund to trade. – Reuters