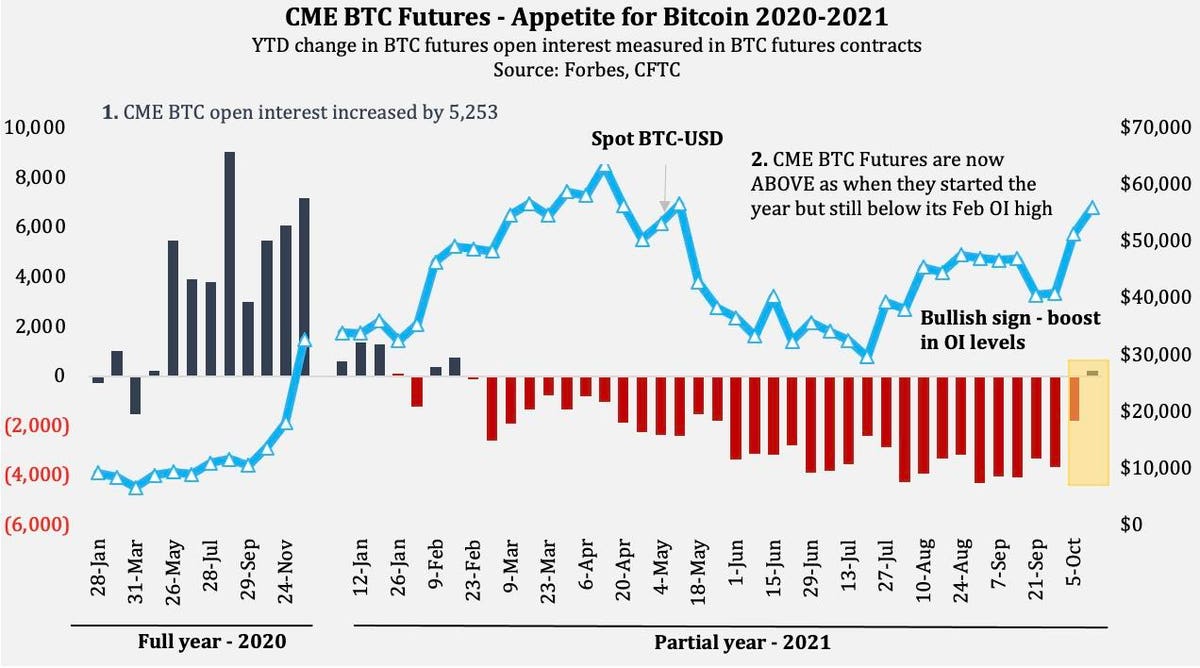 A case of buy-the-rumor, sell-the-news appears to be all the rage in Chicago, home to the Chicago Mercantile Exchange Group (CME Group CME ), the world’s largest regulated futures and options exchange. The rumor in question has been around for weeks and posits that the U.S. Securities and Exchange Commission (SEC) may agree to approve the creation of bitcoin ETFs if the latter use BTC futures contracts as collateral rather than spot bitcoin.

Which brings us to the sudden rally in money deposited in bitcoin futures ‘open interest’ (OI) contracts since early September. Think of open interest as the money investors tie up to support the bets on market activity. CME data shows 10,918 contracts in BTC futures OI as of October 12, a boost of 4,556 contracts (+72%) over a six week period and now in the black relative to where it started the year – it had been in the red since mid-February.

As a recent Forbes report indicated, a relatively small number of commercial traders are playing a key role on the demand side reflected in the rising CME bitcoin futures OI. While the identity of these firms is protected by both the CME and by the CFTC reporting protocol, the manner in which they are tagged within CFTC Commitments of Traders report suggests they are corporations and non-US financial institutions with deep industry insight. This is also an indication they are sufficiently sophisticated to venture into the futures market and are flush with capital to do so in large dollar amounts – each BTC futures contract is worth five bitcoins, equivalent to approximately $287,625 at the prevailing bitcoin price. Also in recent weeks, hedge funds have provided liquidity – think of liquidity as the money required to find a seller for every buyer, per CME Group trading rules.

The identity of trading groups involved in the 72% surge from October 5 to October 12 will only be known on Sunday when the CFTC releases the new COT report. But what was known as of Tuesday night is that the weekly increase in BTC futures OI was above 2,000 contracts – a very high level of weekly change.

This surge in CME crypto futures isn’t likely a blip.  The value of all crypto futures OI broke into record territory on October 5 at $3.3 billion, meaning it’s already higher than in April when bitcoin was trading at its $64,900 all-time record. In other words, there’s very little reason for this much capital being tied up unless these savvy CME futures investors expected a major positive development before the contract expires. One likely explanation is they expect a bitcoin ETF approval soon. CME futures has been known to signal major change, and by the looks of it, it may have already started.

The significance of bitcoin futures supporting BTC ETFs cannot be overstated. Viable bitcoin ETF applications relying on BTC futures include those by ProShares, Invesco Ltd. IVZ , VanEck, Valkyrie Digital Assets and Galaxy Digital. If one of these, or any other, is approved, other big asset managers like Fidelity and Vanguard will want to package their own version of BTC ETFs and BTC mutual funds. Said differently, there would be a race for scale among asset managers to see which of them gets the lion’s share of massive institutional bitcoin inflows. Likewise, investors will be able to easily get bitcoin or crypto exposure from the convenience of their 401k and IRA accounts without having to open a crypto exchange account. This will in turn let stock exchanges like the Cboe, Nasdaq NDAQ , and NYSE rake in BTC ETF trading fees. Banks won’t want to be left behind and they will do what they do best: keep a large inventory of tradable assets—in this case bitcoin or bitcoin futures—to support the trading activities of large clients.

But of course, the denouement of this story involves the SEC and its new chairman Gary Gensler, someone who quashed retail speculative activities in currency markets while at the helm of the CFTC and may soon disappoint bitcoin ETF fans. Time will tell what ultimately happens, but the stakes are high and something genuinely big seems to be cooking..