S&P 500 bulls missed a good opportunity, and credit markets close doesn‘t add to bullish sentiment. High yield corporate bonds led the selling in what turned out a strong risk-off day in debt. Light volume, holiday days often don‘t end up on a weak note, which highlights the challenges the bulls are faced with. Yes, today‘s overnight upswing will likely get tested.

Sure, credit market could take the reprieve I was looking for instead of yesterday, today. Would stocks enthusiastically follow through? Value had great trouble yesterday even when faced with rising yields. All that‘s necessary is a spark, and tomorrow‘s CPI is likely to deliver that. I‘m looking for a reasonably hot number that wouldn‘t show the massaged figure‘s further deceleration. Talking numbers powerful enough to make the Fed move – and more importantly to make the markets force the Fed to move – I asked yesterday whether there are:

(…) creeping worries about Fed policy mistake in letting inflation become an even bigger problem than it is already? Not that it‘s not set to become one – even the lazy and slow PCE deflator has scored a jump not seen in decades.

For perspective, wholesale prices in Germany just jumped over 13% year on year. The increasing doubts would be seen in the pressure on USD – the dollar looks set to swing lower next. Not breaking down, but gradually trending lower. It‘s telling that not even higher yields could power it up over the past week. Whatever the chart pattern it‘s in, the inflation expectations dynamics is likely to catch up with it as real rates will have trouble keeping up. And that‘s a boon in this war of attrition, in this waiting game in precious metals.

Meanwhile, commodities aren‘t hesitating, and the shallow intraday oil declines are promptly being bought up. Faced with slowing real economy, even copper is waking up after a long slumber. Bitcoin is around 15% off its all time high. What else to add?

Let‘s move right into the charts. 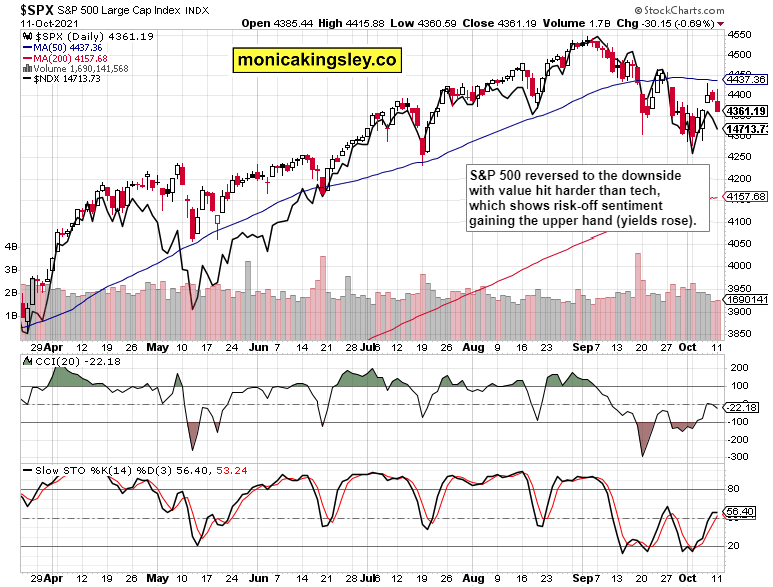 S&P 500 reversed on solid volume – not outstanding one, but good enough to leave the medium-term advantage with the bears.

HYG kept plummeting as the session drew to its close, and the credit markets assessment for this week, isn‘t a positive one.

Precious metals didn‘t send bullish signals yesterday, but the fireworks can be expected tomorrow. All it takes is a few Fed speakers underplaying the evolution of inflation. 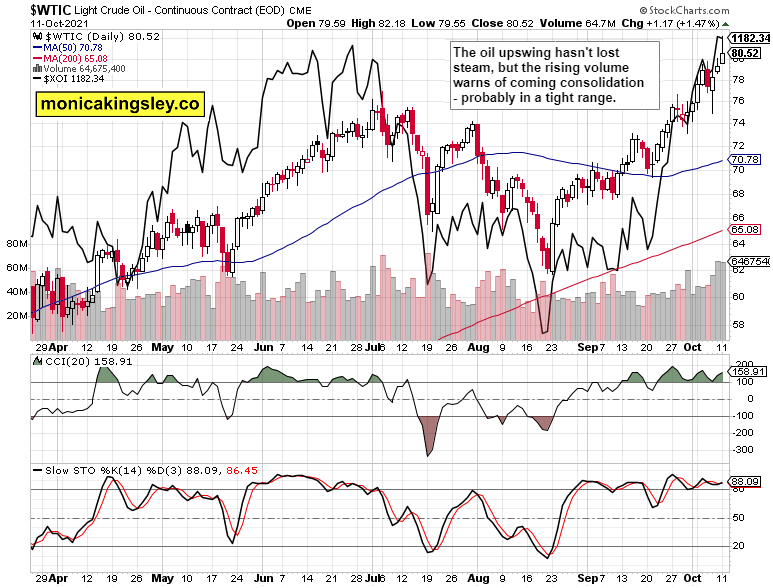 Crude oil retreated from $82, yet remains perched above $80. Its trading range is likely to remain quite narrow, and a sideways consolidation (consolidation in time) shouldn‘t be surprising. 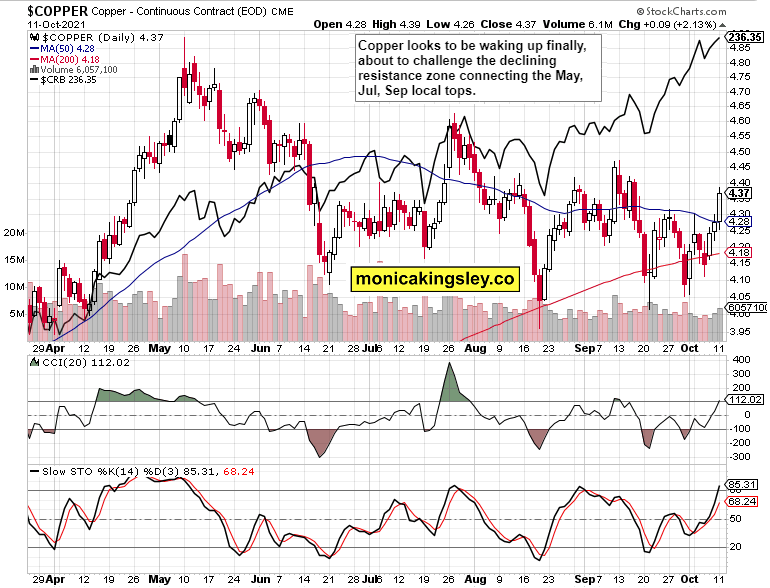 Copper finally having come alive, is a good sign for precious metals as well. It‘s an encouraging sign of daily outperformance. 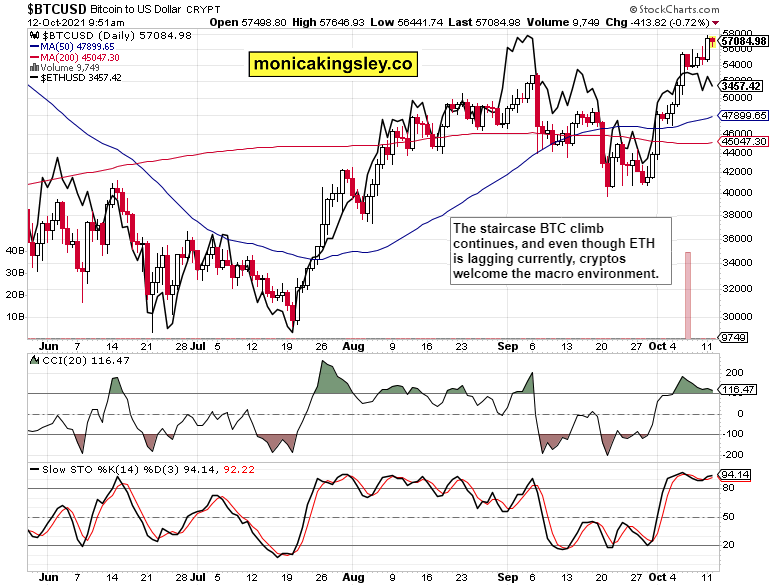 Bitcoin is rising while Ethereum pauses – the daily indicators are vulnerable to a consolidation, but overall, the path of least resistance is still up.

Stock market rebound will likely run out of steam, and consolidate before the next major move. Odds are that the bears aren‘t done yet – as I often say, it‘s the bond markets that usually have it right, and stocks are more often than not catching up with being on the wrong side. Despite seasonal tendencies to appreciate now, the focus is rightfully on Fed‘s inflation brinkmanship. I view this as Treasuries making the move without waiting for the Fed‘s blessing. Real assets and cryptos stand to benefit as inflation expectations keep trending up.