The global inflation scare has comparable effects across developed market debt markets. Conviction about Fed hikes is surprising, but shows the degree of nervousness about a broader re-pricing higher rates. European rates are not immune, despite a range of different macro situations.

A clear change in market mood

US market participants return from a long weekend celebrating Columbus day to yet higher yields. The change in narrative, from one where higher inflation was a reason to downgrade Fed hike prospects, to one where the Fed is increasingly expected to move early to stop inflation, is striking. This is nowhere as evident as in rates markets greeting a dismal job print, but consistent with a steepening Phillips Curve, with a more aggressive Fed hiking path starting in 2022.

This exerts two opposite forces on the US yield curve. Broad re-pricing of interest rates prospects tends to affect the long-end most. This is because one measure of interest rate risk is duration and that duration increases with the maturity of any debt (or interest rate) instrument. In a context of rising rates, the risk reduction from shedding the same amount of long-end debt compared to shorter one is significant, so it tends to bear the brunt of the sell-off. There is also the argument that if the market starts assigning a greater probability to Fed tightening, it might also be tempted to discount a longer hiking cycle.

Arguing against the above narrative, the dominant one it should be said, is the increasing risk of supply-side constraints acting as a break on the recovery. This would tend to flatten the curve all else being equal. Surprisingly, this possibility does not seem to have much purchase on investors’ psyche, but it was a prime concern in the market over the summer months. An alternative, or complementary, explanation for the steepening is that markets are increasingly focused on tapering and hikes happening in short order, so the long-end sell-off effect dominates.

Of course, none of these dynamics are specific to the US. USD markets finds themselves in a roughly halfway house between the UK, facing hikes as early as this year, if money market pricing is to be believed, and the Eurozone where no-one seriously considers hikes before 2023. This ensures that GBP curve re-steepening faces headwinds on days, like yesterday, when two BoE members seem to endorse swift action to stamp rising inflation expectations. On other days however, selling pressure affects the back-end the most, ensuring rising rates are visible across the term structure. 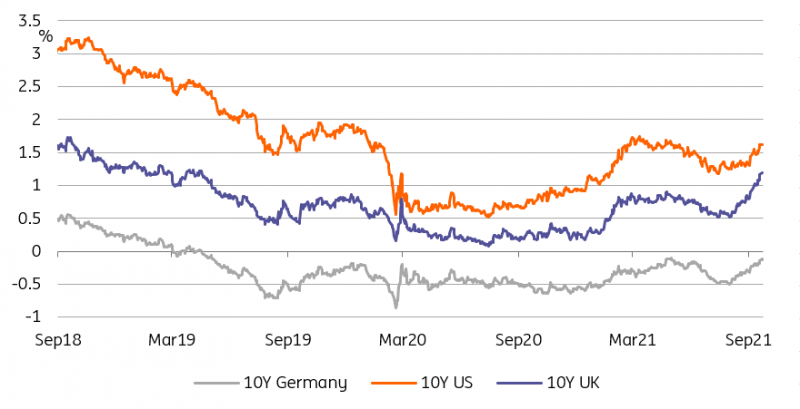 Realistically, this state of play is going to continue. Market sentiment beyond the worlds of fixed income seems relatively immune to the sapping effect of inflation. This removes a key circuit-breaker to bond sell-offs, which tends to benefit from safe-haven demand when risk markets feel the heat. Today represents something of a peak for EUR duration supply (see below), and tomorrow’s 30Y auction should hopefully draw a line on supply-related selling pressure on USD debt. If this brings the hope of more balanced curve dynamics in the latter part of the week, we think the fundamental reasons for the debt sell-off will persist. This should allow 10Y Bund and Treasuries to scale their spring 2021 peaks at roughly -0.1% and 1.75% respectively over the coming weeks.