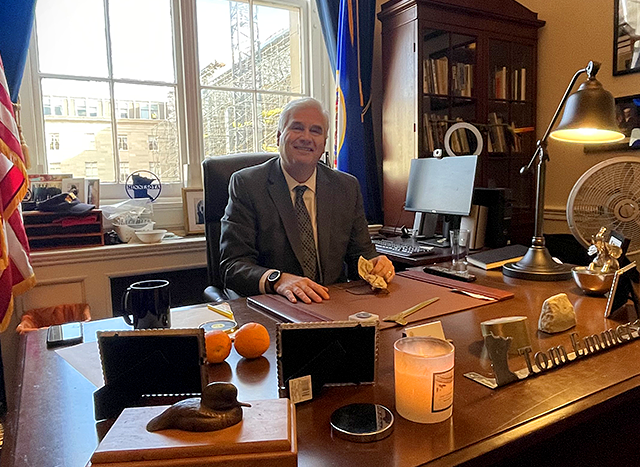 It all started with a book.

One day early in his time as a representative on Capitol Hill, Tom Emmer found a book called “The Age of Cryptocurrency” sitting on his desk, left there by one of his young staffers.

“If you give me a book, I read it,” Emmer said. When he spoke to the staffer after finishing the book, the staffer told him that if he wasn’t the most knowledgeable member of Congress on cryptocurrency, he was at least in the top three or four.

This all occurred between 2015 and 2016, when the concepts of cryptocurrency and blockchain technology were still relatively new in Congress.

Since reading “The Age of Cryptocurrency” at the beginning of his congressional tenure, Emmer, now co-chair of the Congressional Blockchain Caucus, has introduced a number of bills on cryptocurrency and blockchain technology. But, according to Emmer, Congress still doesn’t really get it.

For the otherwise uninitiated, cryptocurrency is digital money that gets its name from the encryption that is used to keep it secure. Cryptocurrency uses blockchain technology, a massive, decentralized network of computers that keeps track of transactions. Cryptocurrency can, in some cases, be used to buy goods and services, but in the U.S. it’s better known as an investment, functioning similarly to stock market investments, with owners buying and selling as a currency’s value rises and falls.

People can get cryptocurrency by buying it, or in some cases by mining it. Crypto miners use powerful computers to win currency by being the first to solve complex math problems — sometimes likened to finding the final piece to a near-impossible puzzle — that verify transactions.

The Congressional Blockchain Congress was formed in September of 2016 by Rep. Jared Polis, a Democrat from Colorado and Mick Mulvaney, a Republican representing South Carolina who later served as chief of staff to President Donald Trump. The two congressmen started the caucus to raise awareness for cryptocurrency and get involved in policy making surrounding the quickly growing technology.

Now, the Blockchain Caucus has 30 members and four co-chairs (including Emmer), signifying a growth in interest over the last few years.

But according to Emmer, most members of Congress are still not as up-t0-speed on crypto as he’d like them to be. He described five or six other offices as being “crypto-fluent,” but that a fairly large proportion of lawmakers — around 20 percent or more — are “crypto-ignorant.” That, he said, has been one of the largest roadblocks to pushing forward legislation around cryptocurrency and blockchain technology.

“Although, you get a lot of young people that are in these other offices that are very aware of crypto,” Emmer said. “That’s the silver lining here.”

Congress is still finding its way on crypto laws and regulations

Issues with “crypto-ignorance” have caused Emmer and other Blockchain Caucus members to object to actions taken by Congress. A recent example came in the recent $1.5 trillion infrastructure bill. The Senate passed a version that included a provision that would raise $28 billion over 10 years in cryptocurrency tax revenue by requiring cryptocurrency brokers to report certain transactions to the IRS. Emmer and other crypt0-savvy lawmakers objected.

The problem was not with the idea of taxing cryptocurrency per se, but with how the law defined a crypto “broker.” The Blockchain Caucus was concerned that the definition in the legislation was so broad and unspecified that anyone involved in any kind of crypto transaction — including a software engineer or a miner — could qualify as a broker. Along with the other co-chairs of the caucus, Emmer sent a letter to every representative in the House raising concerns about this. The lawmakers emphasized that legislation like this could drive blockchain software development and cryptocurrency mining out of the U.S.

In general, Congress has been slow to create laws and regulations around cryptocurrency.

There is still no real clarity from the Securities and Exchange Commission on how cryptocurrencies should be categorized, and the debate over whether crypto should qualify as a security has been going on since Bitcoin, the world’s first widely-adopted cryptocurrency, came into existence around 2008. If cryptocurrencies qualified as securities, the SEC would have full power over them, meaning cryptocurrencies could be regulated in the same way that stocks and bonds are regulated.

“Right now, we don’t have a clear definition of what cryptocurrencies are,” said Vivian Fang, associate professor of accounting at the University of Minnesota’s Carlson School of Management who teaches a class on cryptocurrency and blockchain. “We can pretty much safely assume that cryptocurrencies are not commodities, because there are no physical goods or merchandise behind it — it’s not tied to gold or metal. So the central debate is whether cryptocurrencies can qualify as securities.”

Emmer said the first step Congress should be prioritizing when it comes to crypto regulation is defining or categorizing it as either a commodity, a security or a currency. Like Fang, he believes a security label would be the most likely, with a potential long-term transition to official currency.

“I think we should create something that creates that clarity [of what qualifies as a security], something that clarifies what regulations do apply,” Emmer said. “In fact, I would argue, in some cases crypto is over regulated…because you have the SEC saying they have jurisdiction.”

In July, Emmer introduced the Securities Clarity Act, which would provide a clear definition of assets like cryptocurrency under securities laws. The bill has been referred to the House Committee on Financial Services, but no other actions have been taken.

Although Emmer emphasizes the classification of cryptocurrency, it isn’t what a lot of lawmakers are focused on. In committee hearings, Emmer said he’s been frustrated by the pushbacks he’s gotten from Democrats and Republicans alike over crypto’s involvement in crime and its impact on the environment.

“We’ve had people in front of the committee saying, this is bad for the environment, because you’re burning up so much electricity, a false argument,” Emmer said. “What they’re doing is they’re trying to distract you from what we really need to be talking about.”

It is true, however, that mining cryptocurrency uses a lot of energy. Bitcoin miners now have warehouses filled with powerful computers, all racing to validate transactions and enter them into the public ledger.

“Mining is trying to see who runs fast enough to solve a mathematical puzzle,” Fang said. “So it really comes down to which computer is fastest, and to win the race, you need really high computing power equipment, and that calls for more energy.” This method of mining cryptocurrency is called “proof of work.”

A new method of mining cryptocurrency, called “proof of stake,” may lessen the technology’s energy consumption. In the “proof of work” model, miners are dedicating hardware resources (like expensive computers) to secure a network. With “proof of stake,” cryptocurrency owners are instead dedicating, or locking up, some cryptocurrency that they can’t spend. The blockchain uses that locked-up crypto to secure the network. This is a more energy efficient method of mining crypto, and Fang said the industry is moving in this direction. It’s not quite there yet, though.

The other main criticism lawmakers on both sides of the aisle have with cryptocurrency is its potential involvement in crimes like extortion, blackmail and other illicit activities.

“Were there issues when this started? Absolutely. Will there be issues in the future? Sure. But cash is still king if you’re trying to avoid government monitoring. You can put eight suitcases of cash in places where, I’m sorry, you’re not going to be able to get away with it with crypto,” Emmer said.

Although the company claimed to have paid a $4.4 million ransom in total, Emmer pointed to this situation as an example of a federal agency’s ability to track down illicit funds paid in cryptocurrency, a feat that may not have been as doable had the hackers worked in cash.

Overall, though, Emmer’s focus when it comes to cryptocurrency is making the U.S. open enough to innovation in the crypto and blockchain space that it will encourage entrepreneurs to keep their business here.

“The bottom line is we have to leave a space that’s fluid enough so that entrepreneurs and innovators can create the next great thing here in this country,” Emmer said. “Can this completely disrupt traditional finance, and can it be a part of traditional finance? I think it can. I think it already is, I think traditional financial institutions are finding ways to lean in and be involved. It’s really important, though, that the government catch up and make sure it gets out of the way.”