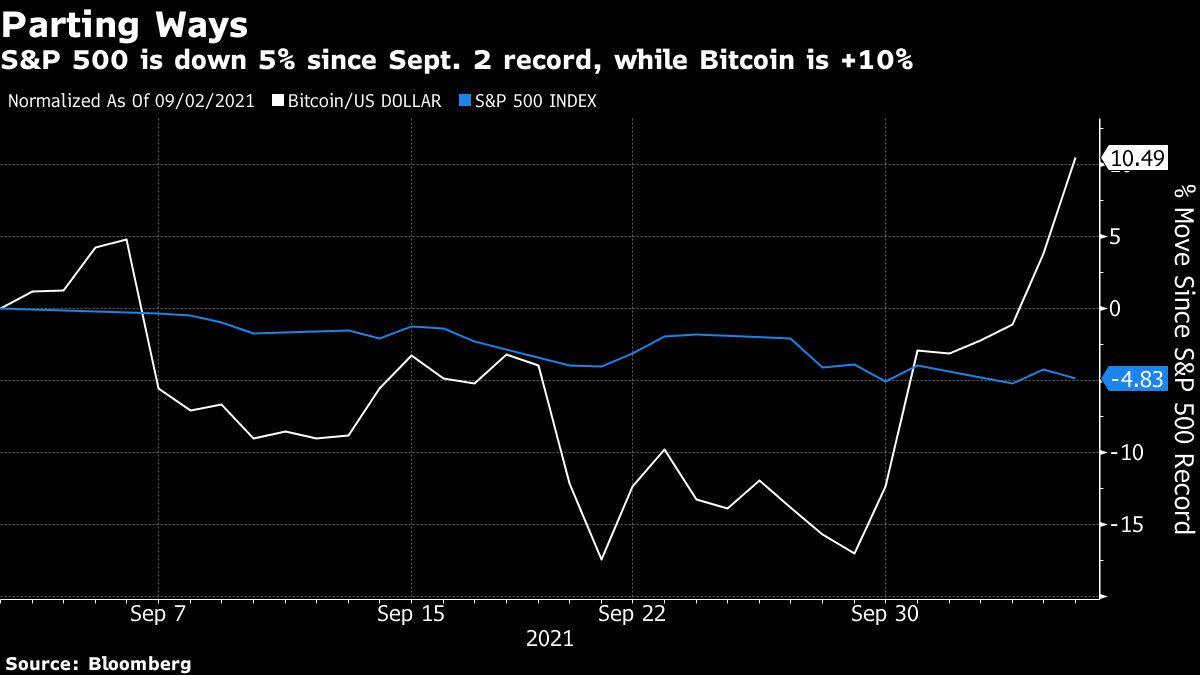 (Bloomberg) — Whenever traditionally minded investors think they finally have their heads wrapped around cryptocurrencies’ role in financial markets, the digital asset class always seems to prove them wrong.

The ink had barely dried on analysis pointing out that Bitcoin and stocks were moving in the same direction (downward) in September when that positive correlation quickly reversed this month. As it stands now, the S&P 500 is down about 5% from its last record on Sept. 2, while the biggest cryptocurrency is up 10%.

The decoupling of Bitcoin and stocks could revive one of the longstanding promises of cryptocurrencies heralded by their proponents — that they can serve as a hedge to protect investment portfolios when equities sell off during times or turmoil. That’s a function that is highly in demand now, with many worrying that Treasuries can’t be relied upon to perform that role during a period of ultra-low yields and accelerating inflation.

Still, the highly speculative nature and often-unexplainable volatility of crypto leave many reluctant to attempt to pigeonhole it into reliable relationships with traditional assets.

For Stephane Ouellette, chief executive officer of the crypto-focused platform FRNT Financial Inc., it’s a matter of recognizing what type of “trading window” is dominating sentiment. These can be swiftly moving targets.

“Sometimes you may say it’s correlated with more speculative equities like tech, other times a store-of-value-type mentality takes over and it’s correlated with gold; in major liquidations the space tends to correlate with risk assets generally,” he said. “While for periods these relationships are relatively consistent, they tend to change at a moment’s notice. And that appears to have happened here.”

Now that it’s unlinked from equities, he said, “we appear back in some kind of inflation-hedge, hard-asset-correlated window.”

That jibes with the thinking of JPMorgan Chase & Co. strategists including Nikolaos Panigirtzoglou, who speculated in a note Wednesday that institutional investors could be returning to Bitcoin, perhaps seeing it as a better inflation hedge than gold.

Over the last 10 trading sessions platinum — a traditional inflation hedge — has been the most tightly linked macro asset to Bitcoin among those tracked by Bloomberg, with a correlation coefficient of 0.76. (A coefficient of 1 means the assets are moving in lockstep, while minus-1 would show they’re moving in opposite directions.)

However, the mercurial nature of crypto, and the shifting narratives employed to explain its performance, raise the risk that investors could be fooled by randomness.

It’s probably too early to get comfortable connecting dots between crypto and traditional asset classes, according to Brian Mosoff, CEO of Toronto-based investment company Ether Capital Corp. He sees crypto as still very much a risk-on asset like stocks because investors who have bought over the past year or so “don’t yet have full conviction that the asset class is here to stay.”

Eventually, though, Mosoff sees the promise of crypto playing out as an uncorrelated asset and, as such, a useful hedge. It’s plausible that is part of what’s driving Bitcoin’s latest leg higher, as uncertainty builds surrounding the ramifications of the U.S. debt ceiling brinkmanship and Federal Reserve policy. While politicians can drive the government to the brink of default on its debt, and central bankers can grow or shrink the amount of money, the supply of Bitcoin is limited and predictible because it’s all been written into its software code.

“This is a moment when the new world steps in and says there’s a reason why these are core functions and core value propositions to the design of this asset class,” he said. “Investors are slowly saying maybe it’s not such a crazy idea and that’s why capital is trickling into this space,” he said.

Of course, there are potential reasons for crypto’s recent bust and boom that have nothing to do with its theoretical or real role in investment portfolios. China’s latest crackdown on cryptocurrency transactions that caused a selloff last month has been overshadowed by more bullish news: A Bank of America deep-dive research report calling the asset class too big for investors to ignore, U.S. Bancorp’s launch of custody services to institutional investors, and reports that Brazil is considering legislation making Bitcoin legal tender.

On top of that, there have been some favorable comments on crypto from U.S. lawmakers, and signs of big-money investors, or “whales,” making large purchases, as CoinDesk reported.

There’s also another obvious reason that Bitcoin may have decoupled from equities this month: It’s getting pumped liked mad. The phrase “Uptober” has spread quickly among true believers on social media as a rallying cry for gains in October.

To Steve Sosnick, chief strategist at Interactive Brokers, the latest boom is reminiscent of the speculative frenzy surrounding meme stocks such as GameStop Corp. and AMC Entertainment Holdings Inc. that was fueled by aggressive social-media campaigns.

“I think they draw from a similar pool of investors, if not the same pool, he said. “And I think that the mentality behind the trading can be similar.”