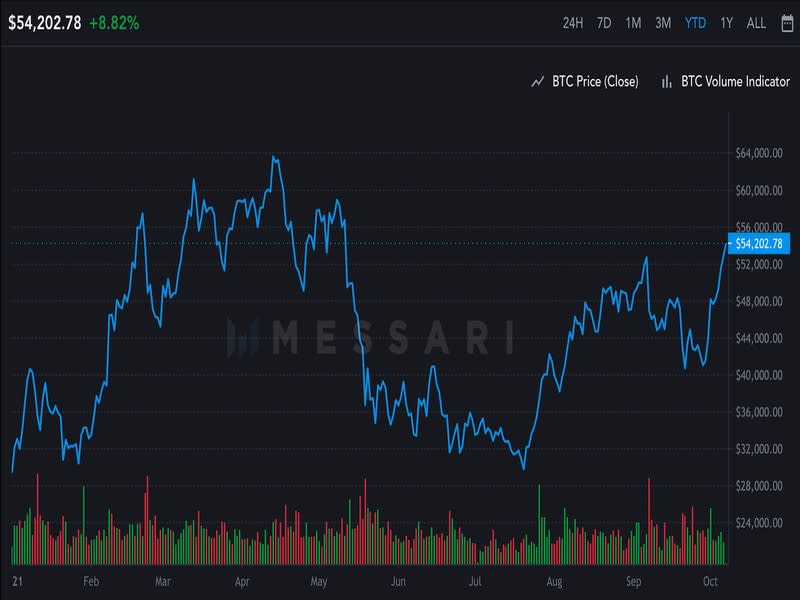 Bitcoin, the world’s largest cryptocurrency, surged past $54,000 to the highest in almost five months as bullishness returns to the market following the prior months’ slump.

At press time, bitcoin was trading at $54,220, up 8.7% over the last 24 hours. It was the highest price since May 12, before a crackdown by China on its domestic cryptocurrency and other negative news helped push the price below $30,000. In February, the bitcoin price had hit an all-time high close to $65,000.

The latest rally has pushed bitcoin’s market capitalization back up above $1 trillion, according to data from Messari.

“Bitcoin’s move to a five month high comes as no surprise to those who have been following this asset closely over the last few months,” said Jason Deane, analyst at Quantum Economics.

Markets often move on momentum and sentiment – especially after periods where it has been trading for a while in a price range, according to Deane. In June and July, bitcoin mostly traded in between $30,000 and $40,000, and then in August and September, the price settled into a range from $40,000 to $50,000.

Sentiment has significantly improved over the first week of October, signaling a shift away from the previous few months’ market panic. Bitcoin’s jump of more than $10,000 just since Oct. 1 works out to a gain of 25% already this month.

“If the bulls are looking for a pain point, then the next stop is $60,000, and if they don’f find a pocket of shorts to force out, then confidence will only grow,” Matt Blom, global head of sales trading at the digital-asset firm Eqonex, wrote Wednesday in a newsletter.

According to analysts for the cryptocurrency exchange Kraken, the fourth quarter has historically been bitcoin’s best, with an average return of 119% dating back to 2011. Last year, the price nearly tripled in the fourth quarter.

Denis Vinokourov, head of research at Synergia Capital, attributed the latest rally to U.S. Securities and Exchange Commission (SEC) Chair Gary Gensler’s statement to Congress on Tuesday that the SEC has no plans to ban cryptocurrencies.

“Gensler may have come across as very anti-crypto but he is not here to kill off crypto,” said Vinokourov.

“Tectonic plates have come together with the threat of a ban being removed,” said Charles Morris, founder of ByteTree Asset Management.

Traditional markets are struggling in the current macroeconomic environment with falling stock prices, a potential energy crisis and fears over losses in the Chinese property sector, according to Morris.

“Global markets are derisking,” partly due to fears over a possible financial crisis triggered by debt repayment woes at the Chinese real estate developer Evergrande, the Kraken analysts wrote in a monthly report.

That might mean that “bitcoin is arguably becoming more resilient against traditional market turbulence,” according to the report.

Morris said that the next leg up for bitcoin could come from a further adoption push by Wall Street and traditional financial firms.