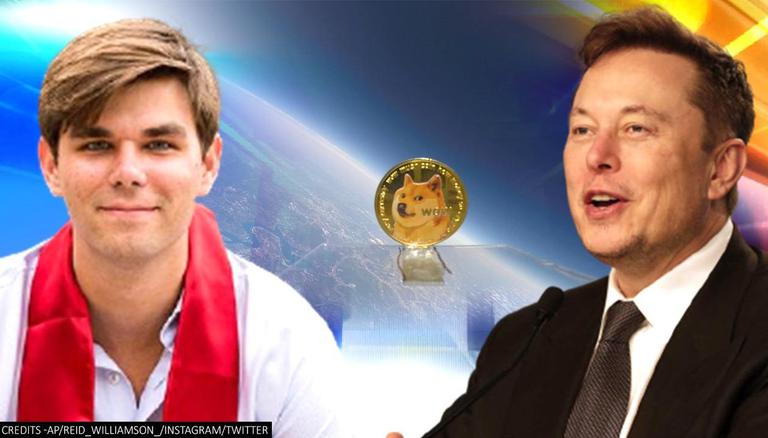 On the occasion of business magnate Elon Musk’s 50th birthday on June 28, a US-based YouTuber Reid Williamson sent a token of Tesla CEO’s favourite cryptocurrency ‘Dogecoin’ to space, literally. In a video posted on social media on Monday, Williamson celebrated the birthday of ‘Dogefather’ in a unique manner and the video is called “I Sent A LITERAL Dogecoin To Space.” In an over 11-minute-long video, YouTuber showed the entire process of purchasing a replica of the Dogecoin, weather balloons, GPS trackers and helium gas tanks to power the balloon enough to reach the space. Even the apparatus that he sent outside Earth was set up by Williamson from the start.

The video showing the entire journey for Musk’s 50th birthday, Williamson along with his friends set up the balloon with Dogecoin fastened on it along with a camera to reveal the journey of the apparatus into space. The video also showed that the balloon carrying Tesla CEO’s favourite digital currency, that he tweeted about himself, stayed in space for a considerable amount of time. Eventually, the balloon carrying Dogecoin landed more than 30 miles from it was launched initially.

Further in the video, as Williamson and his friends drive to the landing site, they discover that the Dogecoin replica was not there. While Williamson’s channel has 100 subscribers, the video of him celebrating Musk’s birthday  has been viewed over 1,200 times on YouTube and his followers commented saying that the YouTuber is “brilliant.” One of the internet users said, “How does this guy only have 80 subscribers with that kind of video editing. Great job and subbed!” Another celebrated “Dogecoin to the moon.”

Tesla CEO Elon Musk, known for impacting global markets just by his brief tweets, dubbed Dogecoin “the people’s crypto”. Cryptocurrencies such as Bitcoin and Dogecoin are generated by computers with their supposed values coming from a finite number that can be computed.

From meme to cryptocurrency: Dogecoin

In Dogecoin, ‘Doge’, as described by its creators is a’ “fun, friendly mascot.” After first emerging several years ago, the iconic doge meme featuring ‘Shibe’ exploded on the internet. An Australian marketer, Paler had even joked about combining two of the internet’s most famous topics which were the doge and the cryptocurrency. At the time, Palmer had tweeted saying “pretty sure it’s the next big thing.”

The cryptocurrency, Dogecoin began as a meme and has now existed for nearly seven years. It was launched in 2013 owing to the short-lived online craze for pictures of the specific Japanese dog breed. Through December 2020, Dogecoin has been gaining its value but the latest spike has triggered howls of “crypto-hype” from sceptics. Even though started as a joke by two software engineers Billy Markus and Jackson Palmer, as per CNN the cryptocurrency has witnessed a jump of 2000% in value since the beginning of this year.

“Dogecoin is an open-source peer-to-peer digital currency, favoured by Shiba Inus worldwide.” The official website of Dogecoin describes the cryptocurrency as “the fun and friendly internet currency”