The chief executive of eToro, the fast-growing equity, derivatives and cryptocurrency trading platform, expects regulators to impose new rules to protect investors in bitcoin and other digital currencies, following actions such as the UK’s clampdown on the crypto exchange Binance.

His comments are a sign of the recognition within the crypto industry that policymakers are poised to act against a sector that regulators had initially been slow to police.

But Assia added that regulators needed to learn more about digital currencies as they set new rules. “The most important thing for regulators is to understand crypto, and understand that it is here to stay,” he said.

Assia’s company has been dubbed “Israel’s Robinhood” in a nod to another fast-growing trading platform that has attracted a new generation of retail investors in the US. Almost 70 per cent of eToro’s users, however, are in Europe and — although it is planning to go public in the US in coming weeks through a merger with a special purpose acquisition company (Spac) — only 9 per cent of its users are in the US, where it does not yet offer direct stock trading but has cryptocurrency and crypto “copy trading” services.

There’s no doubt that if something went up 1,000 per cent it’s very volatile, and you should understand that as part of your portfolio allocation

The drumbeat for more regulation of cryptocurrencies such as bitcoin has grown this year as their value has soared to $1.5tn amid price extreme volatility, and amid further examples of their use in illicit activities such as money laundering and fraud.

The UK’s Financial Conduct Authority barred Binance from offering cryptocurrency exchange and other regulated services in Britain this week. US financial authorities are also preparing to take a more active role in regulating the market, the FT reported last month.

“We also want to make sure that we communicate well the risks of investing in high-risk assets,” Assia said. “There’s no doubt an asset that went up 100 per cent can very easily go down 50 per cent. There’s no doubt that if something went up 1,000 per cent it’s very volatile, and you should understand that as part of your portfolio allocation.”

EToro was founded in 2007 and has offered bitcoin trading since 2013. It said in a regulatory filing in March that crypto assets accounted for 16 per cent of revenues last year.

The growth of easy-to-use trading platforms and interest in cryptocurrencies and so-called meme stocks have lured a younger generation to learn about investing. 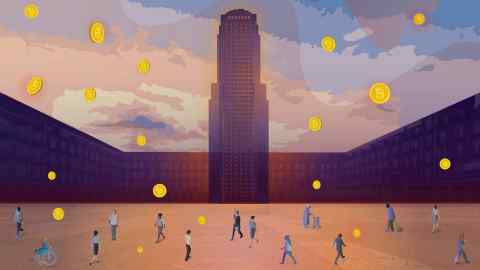 The number of funded accounts at eToro increased by about 500,000 in the first three months of the year, more growth than it experienced for each of the past two years, taking the total to 1.5m. The number of registered users at eToro rose by 3m in the first quarter to 20.6m. That compared with 5m new registrations in the whole of 2020.

The company said on Tuesday that total trading commissions in the first quarter were $347m, a 141 per cent year-on-year increase. Net trading income was also up 72 per cent to $269m. Net profit was down more than 90 per cent over the same period, to $5m, which the platform attributed to heavy spending on marketing.

The deal to go public via a Spac values eToro at $10.4bn, though shareholders in the vehicle are yet to vote on the deal.

For the latest news and views on fintech from the FT’s network of correspondents around the world, sign up to our weekly newsletter #fintechFT