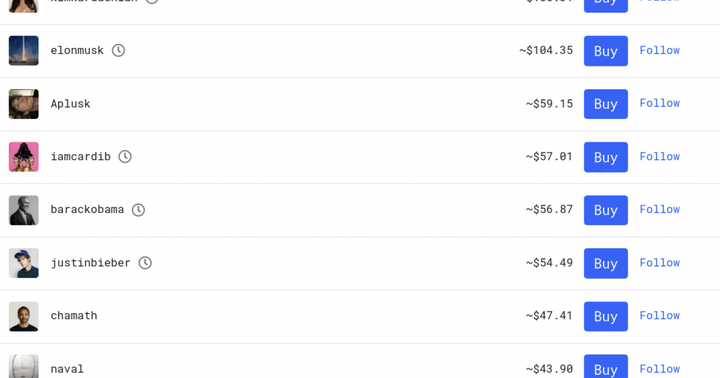 Open source social media platform BitClout continues to grow and is attracting new business leaders and celebrities to the site.

About BitClout: Creators on BitClout have a coin value based on demand from people on the platform. Followers can buy and sell the coin, making BitClout a crypto social network.

Similar to Twitter Inc (NYSE:TWTR), users on BitClout can follow individuals or companies, like posts and reclout them. The major difference is the ability to invest in the accounts on the platform.

To reward their supporters, creators on the platform can offer rewards or exclusives for members who own their coin.

Exchange Launch: In June, Blockchain.com became the exclusive launch partner for $CLOUT, which is the native token used on BitClout.

Customers can deposit $CLOUT onto their Blockchain account for trading.

“We’re excited to provide exclusive access to buy and sell $CLOUT to Blockchain.com users, not just because it’s a popular crypto project but because it also demonstrates that architects, developers and builders can create consumer products with crypto protocols,” Blockchain.com said.

Blockchain.com Ventures is an investor in BitClout.

Another recent change was the ability to be able to buy $CLOUT with U.S. dollars. Prior to this, members of the site had to buy Bitcoin and then transfer their Bitcoin to the site to purchase $CLOUT.

Total BitClout circulation is $1.3 billion with 10.6 million coins traded, up from 10.4 million back on June 1.

Notable New Accounts: In the month of June, several notable additions happened on the BitClout platform.

HubSpot Inc (NYSE:HUBS) founder and CTO Dharmesh Shah joined BitClout and has been active on the platform. Shah’s coin is valued at $13,991 today, making it the sixth most valuable coin.

Gwyneth Paltrow tweeted out that she was setting up her BitClout and saw her coin quickly scooped up. Paltrow has not posted on BitClout and has a coin value of $2,733 today.

Athletes continue to join the platform. NHL player Evander Kane was another notable name to join BitClout. Kane’s coin is valued at $1,079 today.

“BitClout what’s up? EK9 is officially on bitclout, can’t wait to interact with all of you on here,” Kane posted.

One celebrity that users are betting joins soon is Madonna. The coin value of Madonna shot up and became a top trending account after Guy Oseary purchased a large amount of Madonna’s coins on the platforms.

Oseary is an agent that represents Madonna and U2 and currently holds around $180,000 in Madonna BitClout coins. Madonna’s coin is valued at $4,007 today.

Largest Accounts: BitClout reserved the accounts of the top 15,000 influencers on Twitter for BitClout accounts, which means some of the most valuable coins have yet to officially join.

The most valuable coin on BitClout is Tesla Inc (NASDAQ:TSLA) CEO Elon Musk, whose coin is work $38,338 today. The value of Musk was $61,532 per coin back in April.

The second most valuable coin is @naval, reserved for AngelList co-founder Naval Ravikant worth $25,812.