The exchange rates and logos of Bitcoin (BTH), Ether (ETH), Litecoin (LTC) and Monero (XMR) are seen on the display of a cryptocurrency ATM of blockchain payment service provider Bity at the House of Satoshi bitcoin and blockchain shop in Zurich on Friday. (Reuters photo)

The adoption of Bitcoin and other cryptocurrencies as a payment method for goods and services is gradually gaining traction among real-world entrepreneurs despite the inherent price volatility, including a recent dip. 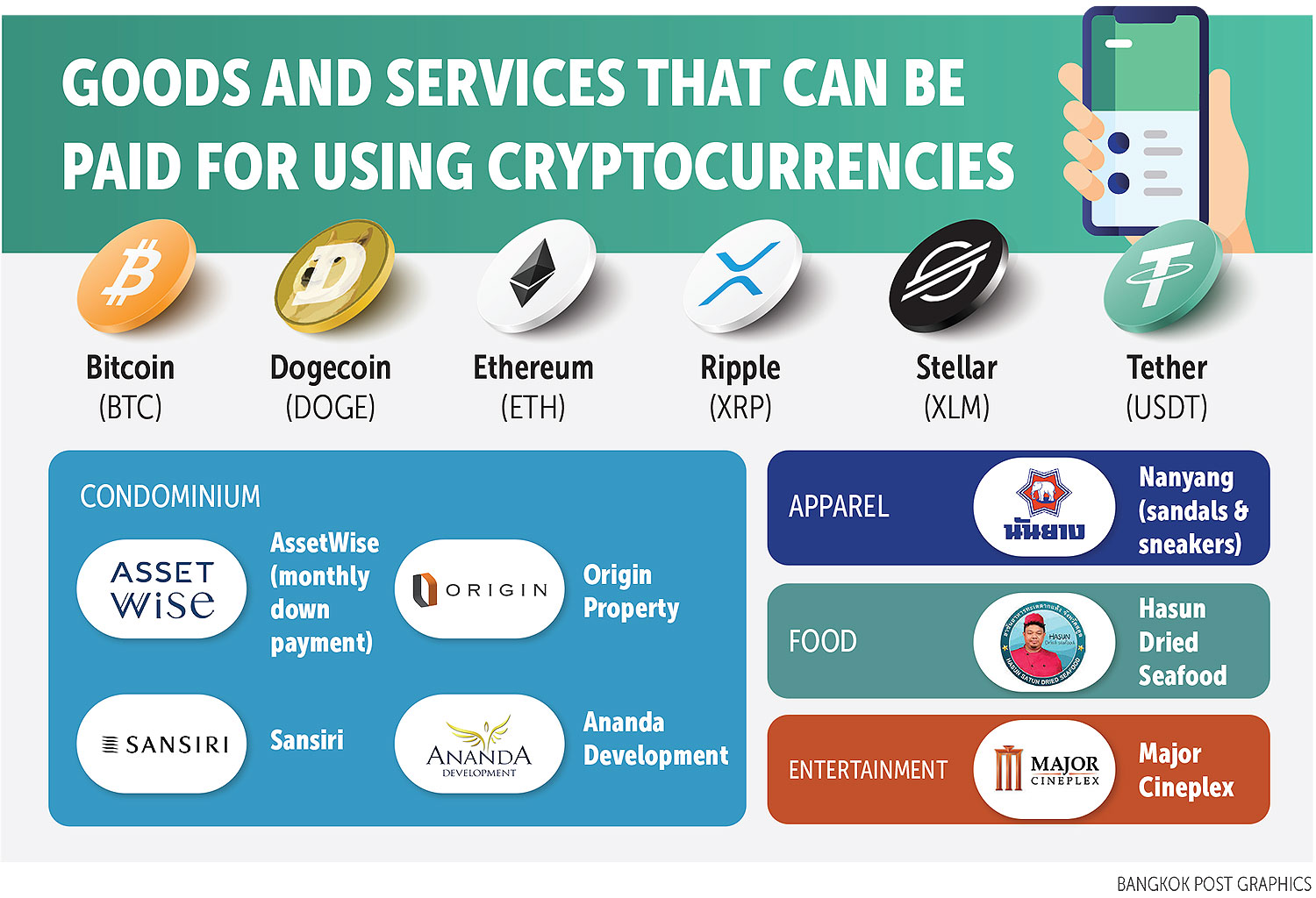 Bitcoin plunged to about half its peak value of over 2 million baht in mid-April.

Thailand is experiencing a transition as businesses seek to leverage this new technology to increase sales and attract enthusiasts, while potentially gathering assets that have the potential to explode in value.

Some businesses have reported a better than expected response from customers after allowing cryptocurrency payments, causing others to follow, while knowing at the very least it could generate media attention.

Despite the growing popularity, some global regulators are tightening their grip on the industry and trading exchanges, as exemplified by the Chinese government’s complete ban on cryptocurrency, which in turn is hampering its adoption in other countries.

The usage of Bitcoin and other cryptocurrencies as a method of payment could eventually be widely accepted in Thailand, but the potential of the asset class depends on whether the Thai regulator can develop a level of oversight that protects investors without impeding the growth of the sector.

According to a survey from Siam Blockchain and blockchain data research firm Chainalysis, the 10 countries with the highest value of on-chain crypto-money received, crypto transfers on the network and crypto trading value are Ukraine, Russia, Venezuela, China, Kenya, the US, South Africa, Nigeria, Colombia and Vietnam.

Japan was the first country in the world to accept Bitcoin and other cryptocurrencies as legal exchange for goods and services.

Cryptocurrencies can be used in convenience stores such as 7-Eleven and Lawson, drugstores such as Tsuruha, and fast-food restaurants McDonald’s and Mister Donut.

The Swiss city of Zug has been dubbed “Crypto Valley”. It is home to many crypto and blockchain startups, including coins with a large market cap such as Tezos and Ethereum, as well as the trading website ShapeShift.

El Salvador announced Bitcoin is accepted as a form of legal currency, while both Venezuela and Malta allow cryptocurrencies to be traded throughout their territory.

Estonia also accepts Bitcoin for payment and distributed ATMs for the cryptocurrency, while Slovenia allows its citizens to buy items with Bitcoin at any of its major department stores and malls.

On the other hand, the trend is tempered by opposition from the Chinese government and other regulators imposing increasingly restrictive controls or outright bans on cryptocurrencies, arguing they want to maintain the stability of the currency market and reduce volatility.

While these restrictions may have good intentions, tight regulation of cryptocurrencies dents investor confidence and is partially responsible for the sharp declines in the prices of Bitcoin and other altcoins over the past 1-2 months.

In Thailand, the cryptocurrency market is entering a boom period.

Thailand is the first country in the region to issue and implement a specialised law designed to specifically oversee the trading and usage of digital assets.

The Digital Asset Businesses Decree was adopted in 2019 to regulate the assets without blocking the adoption of cryptocurrencies as a medium of exchange for goods and services.

Cryptocurrency trading has grown rapidly in the secondary market and is starting to be accepted in the real world, where digital money can be exchanged for items and services.

Many entrepreneurs are eager to boost their sales, services and wages by adopting these assets and have integrated cryptocurrencies, including in the consumer goods, real estate, entertainment and media services segments.

Among these enterprises is Nanyang Marketing Co, a sandal and sneaker manufacturer that allows customers to buy its products using Bitcoin, Ethereum or Dogecoin.

Chakrapol Chandavimol, general manager at Nanyang Marketing, said the company recorded hundreds of participants in its cryptocurrency payment trial, with Dogecoin the most popular form of payment.

Mr Chakrapol said the company’s objectives are to prepare for the future business environment and changes in customer behaviour concerning both front-end and back-end operations.

Nanyang Marketing also wanted to test the market to determine whether cryptocurrencies are real or just a fad. If it is the former, the company wants to demonstrate market leadership, he said.

On March 4 this year, Major announced a trial to accept Bitcoin as payment in collaboration with Rapidz, which offers an exchange management system for goods and services using digital assets.

Payment can be made via the application Rapidz as well as Zipmex, a digital asset exchange platform.

Major said it offered Bitcoin payment to provide another channel for customers and to play a role in supporting the creation of a cashless society.

The company reported a better than expected response from customers following the launch.

Rapidz, as an intermediary, serves as the management system and agrees to absorb any losses if there is a decrease in the value of Bitcoin.

Major is in talks with three other cryptocurrency operators, hoping Bitcoin payments can help the company to expand its customer base quickly, said Mr Narute.

Most of the customers using Bitcoin payments reside in Bangkok, he said.

According to Anurak Sanruethai, the owner of Hasun Dried Seafood, there was substantial interest following the announcement, expanding its customer base.

“Our post was widely shared and increased our customer base,” said Mr Anurak.

“Bitcoin payment is still unusual in Thailand, but it can avoid currency fees customers may have to pay a money exchange provider.”

He is upbeat about the prospects for Bitcoin in Thailand.

“I am familiar with investing in cryptocurrencies so I understand how it works. I think cryptocurrencies will continue to grow in the future and will be used more widely. We are happy to make Bitcoin payment convenient and improve our services while reducing costs for customers,” said Mr Anurak.

In terms of cryptocurrency payment services, each of the digital asset intermediaries in Thailand have their own strategies.

The payment can normally be settled in real time, if both buyer and seller are using the same digital asset intermediary, be that an exchange, dealer or broker.

Zipmex Thailand is partnering with the entertainment industry for Bitcoin payments, while Bitkub Online focuses on real estate firms and social media influencers.

Bitazza provides payment services for five cryptocurrencies — Bitcoin, Ethereum, Dogecoin, Ripple and Stellar — while Satang Corporation tapped into a niche segment of decentralised finance (DeFi) customers by providing entrance and exit connectivity service to the DeFi platforms of many cryptocurrencies.

Atthakrit Chimplapibul, chief executive at Bitkub Online Co, said 20-30 companies such as restaurants, hotels and tourism-related businesses have shown an interest in using cryptocurrency for payments.

In terms of services, Mr Atthakrit said, $FAN, a token YouTubers can give to their fans for loyalty, has been adopted by 1.25 million users with between 200,000 and 300,000 transactions.

Despite wider global acceptance, cryptocurrencies remain a challenge for global regulators as they continue to be used for illicit transactions by people who want to remain anonymous.

Many central banks have been developing a central bank digital currency (CBDC) to provide a cheaper and safer electronic payment service.

Tanwa Arpornthip, a researcher at the College of Computing at Prince of Songkla University, said from a customer’s viewpoint, a CBDC could be used for daily spending or a savings account.

As the currency is overseen by a central bank, it should be more reliable than a cryptocurrency, said Mr Tanwa.

He expects CBDC to be restricted for domestic use and separate from cryptocurrencies in terms of regulations.

“I will personally use cryptocurrencies only on a DeFi platform, for international remittance and to diversify currency risks,” Mr Tanwa said.