El Salvador offers $30 bitcoin to citizens to promote use 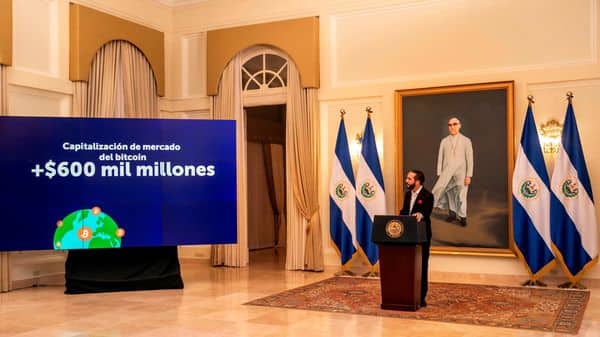 El Salvador’s president says use of the cryptocurrency Bitcoin will not be mandatory, but the country is planning to give out starter accounts with $30 to promote its use.

Finance Minister Alejandro Zelaya said Thursday the government will allocate $120 million to establish as many as 4 million starter Bitcoin accounts, or “wallets,” though he doesn’t think that many people will take up the offer. The wallets are to be known as “Chivo,” a slang word meaning “cool,” or nice.

President Nayib Bukele said that when the law takes effect in September, accepting Bitcoin will be optional.

“Nobody will have to accept bitcoins if they don’t want to,” Bukele said.

El Salvador’s Legislative Assembly approved legislation on June 9 making Bitcoin legal tender in the country, the first nation to do so.

Zelaya said the $120 million for the accounts will come out of the government’s general fund. “Upon registering, the person will receive $30 dollars in Bitcoins” to promote the scheme, Zelaya said.

“We hope to reach a maximum of 4 million wallets, that means covering $120 million, but I don’t think we will reach that amount,” he said.

The company that has run a Bitcoin ATM in the Salvadoran beach town of El Zonte for about a year announced it was installing a second machine in the capital and plans to put in at least a dozen others at shopping malls. The machines give dollars in exchange for Bitcoin or takes dollars and gives credit in Bitcoin.

The digital currency can be used in E Salvador in any transaction and any business will have to accept payment in Bitcoin, with the exception of those lacking the technology to do so. The U.S. dollar will also continue to be El Salvador’s currency and no one will be forced to pay in Bitcoin, according to the legislation.

The exchange rate between the two currencies will be established by the market and all prices will be able to be expressed in Bitcoin — though for accounting purposes, the dollar will continue to be the currency of reference.

The government will promote training for people to be able to carry out transactions using Bitcoin.

The Economy Ministry has said that 70% of Salvadorans do not have access to traditional financial services and it said the country “needs to authorize the circulation of a digital currency who value exclusively follows free market criteria” to stimulate growth.

The legislation established a government trust fund to guarantee automatic convertibility to dollars.

El Salvador received some $6 billion in remittances from Salvadorans living abroad last year, about 16% of the country’s gross domestic product. Bukele has said Bitcoin could eliminate the costs of sending that money home.

Experts say it is unclear how the highly volatile cryptocurrency will be a good option for the unbanked and only time will tell if the new system translates into real investment in El Salvador.