On this Thursday, June 24, episode of Sundial

While 52 people are accounted for, there are still 99 people missing, according to the Miami-Dade Police Department. Fifty-five of the 136 condo units in the building were impacted in the collapse at Champlain Towers South condo building.

WLRN reporter Danny Rivero spoke with Ann Citron. Citron was staying at the Champlain Towers North, near the collapsed building, with her husband and two friends. They had just driven down from Tampa on Wednesday.

“There was a huge rumble, like a military plane was passing like really low. And then another bigger rumble. And then the alarms went off and I went to the window to see, but we were on the side, so we can’t see anything. And then we go to the staircase and there’s all this dust in the staircase,” she said.

Healthcare reporter Verónica Zaragovia said she was receiving messages asking people to donate drinks, blankets, pillows and snacks for those who have been impacted by this tragedy. Miami-Dade Fire Rescue has also set up a hotline for those who have relatives who live or work at the Champlain Tower building and are unaccounted for or know that they are safe. The number to call is 305-614-1819.

Atorod Azizinamini, the chair of Florida International University’s college of engineering and computing, said the important thing is that the building is fully evacuated until structural engineers can conduct a thorough safety check. 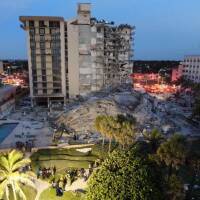 Over the past several years, local leaders have been on a mission to make South Florida the country’s newest tech hub.

Miami Mayor Francis Suarez has been among the most vocal — welcoming Elon Musk to develop a hyperloop tunnel under our city — hosting the largest Bitcoin conference in the world — and calling on tech entrepreneurs to relocate to the region. He’s had relative success on that front — with companies like Spotify and Blockchain.com building headquarters here.

The naming rights to the Miami Heat’s home arena were also purchased by the cryptocurrency exchange FTX.

But social activists point to the city’s income inequality, lack of housing affordability and rising crime as real concerns for residents —that the Mayor’s plan doesn’t solve.

“What surprised me the most about the pandemic has been the rise of Miami, as a tech hub and more, I think it’s not just tech — it’s obvious that it’s tech from San Francisco, from L.A. and from New York and from other places — but it’s also the continuing movement of finance, investment and real estate from New York and from other places around the country. It’s a big deal.” said Richard Florida, University of Toronto professor and co-founder of CityLab. 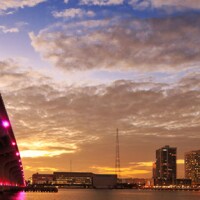 The CDC extended the pandemic-inspired eviction moratorium Thursday until July, for what officials say will be the last time. The end of those protections is more worrisome for communities in South Florida — where housing insecurity was an issue even before the pandemic.

“So many of the folks who are our neighbors are impacted by this housing crisis,” said Santra Denis, executive director of the Miami Workers Center. “[There’s been an] effect on people’s psyche, people are not sleeping well, they don’t feel safe because of retaliations or pressures from their landlord.”

Chire Regans is an artist-in-residence for the nonprofit legal-aid organization Community Justice Project. The Miami-based artist created a video installation that shares testimonies of the county’s residents going through the process of eviction. Her hope is to raise awareness about housing insecurity in the county.

The nine-minute video includes the words of five tenants who were fighting eviction but ultimately were removed from their homes. She hopes that their words will bring attention to the human side of the issue.

“At the onset of the pandemic, there were so many people’s lives who were upturned and one thing you really want to be able to do is provide housing for yourself and your family. So once it becomes a question of whether or not you’re going to have a safe place to live, it affects everyone because it can happen to anyone,” she said. 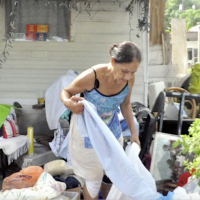