A contest to control crypto is under way 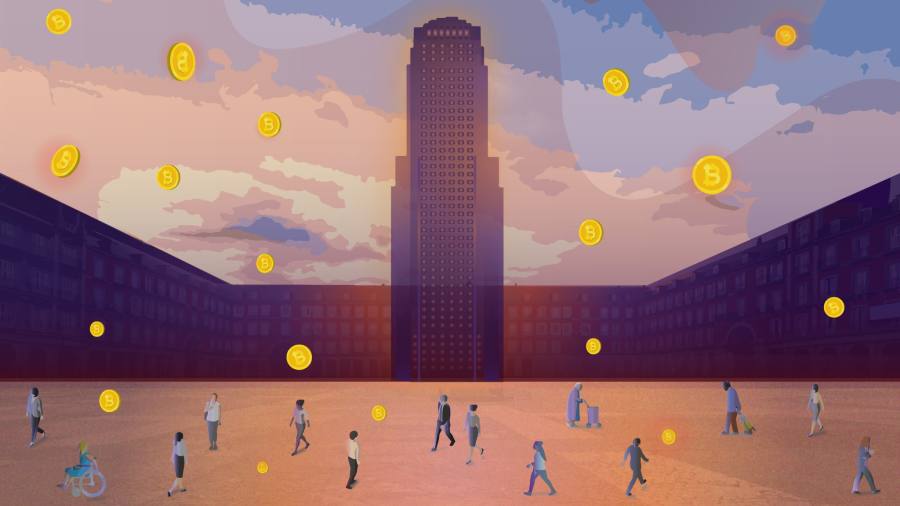 At other times, horizontal networks shape events, operating like crowds in ancient city squares. The “square” used to work best in small, face-to-face groups, but digitisation now enables peer-to-peer systems to operate on a massive scale.

We thus live in a world of institutional “towers” and large networks of “distributed trust”, to cite Rachel Botsman, an Oxford university business professor, and these clash. This matters if you want to make sense of the $1.5tn crypto world. One way to explain this week’s wild price swings is that a clash is under way between the “square” and “tower”.

Until now, the “square” defined crypto. Bitcoin was created with an explicitly libertarian ethos that challenges government control over money. Trust in the system relies on a distributed ledger operated by a crowd, not a central bank.

Yet the crypto world does not lack social structure. The network is defined by distinctive rituals, symbols and creation myths, shaped by dominant players such as Elon Musk.

Indeed, there are several distinct “subcultures within the cryptocurrency space” grouped around different assets, as Grace Rachmany, a crypto expert, notes. “Bitcoiners”, “ethereans”, “monetizers”, “DAOists” and “holonauts” are not identical, in either technological or social terms, even if they can easily seem to outsiders like an anarchic mass.

However, the key issue is that “belonging” — and trust — is voluntary. Musk exercises influence, not power. That in turn makes the signalling devices that define this social network important, since they can shape price.

“Bitcoin community’s value systems and rituals . . . have helped to establish it as money [whose price is shaped] by community, beliefs and a sense of belonging,” observes Mick Marocci, an anthropologist working in crypto. You cannot dismiss “memes” as irrelevant trivia, since they can drive values in this horizontal trust system.

Now, however, a “tower” dynamic is entering the frame. On Wednesday, the Bank for International Settlements (the central bankers’ bank that, in a delicious irony, occupies an actual black tower in Basel) issued a striking report that lashed out at the “square”.

“Innovations such as cryptocurrencies, stablecoins and the walled garden ecosystems of big techs all tend to work against the public good element that underpins the payment system,” it declared. “Bitcoin in particular has few redeeming public interest attributes.”

The report’s criticisms are not surprising. People in “towers” rarely embrace crowd challenges. More noteworthy is that the BIS has explicitly backed, for the first time, the creation of central bank digital currencies to “offer in digital form the unique advantages of central bank money: settlement finality, liquidity and integrity”. In plain English, the tower wants to beat the square at its own game.

Don’t bet on this happening soon. In places such as Singapore, the monetary authorities are sufficiently well organised and unified to unleash rapid and effective digital experiments. Not so in the US or Europe.

Crucial questions surrounding CBDCs are unresolved. Hyun Shin of the BIS says that “data governance is going to be the key issue”. However, nobody knows how central banks might handle this. Nor is it clear if a CBDC can exist without disintermediating and undermining private sector bank networks.

But even before any public debate on these questions starts, governments are cracking down. Just look at China’s clampdown on bitcoin mining, or the regulatory threats from the US Securities and Exchange Commission.

This week it emerged that Goldman Sachs has tested this with a repo trade. I am told that other establishment institutions, particularly in Asia, are doing this, too. It might be viewed as a nascent effort to create institutional crypto train tracks which could enable JPMorgan, for example, to act as a future agent for CBDCs. The “tower” is preparing to strike back.

Where does this leave the crypto “square”? In China, I suspect it will gradually be crushed. Beijing seems intent on using CBDCs to centralise power. In Europe, the “square” may be curbed by bureaucracy.

But the really interesting issue is what will happen in the US, a country that venerates free-market ideas and network-driven innovation. “American cultural values — from support for the underdog to adulation of the frontier explorer — seem to be the precipitating source of how crypto is changing our concept of money,” notes anthropologist Sara Ceraldi. Don’t count out the crowd.

Either way, the point is that nobody can explain crypto prices or other meme assets with monetary economics or portfolio theory alone. The power and culture of “squares” and “towers” matter. Rarely has finance been so fascinating or so hard to model with maths.