Security pioneer and cryptocurrency supporter John McAfee has been found dead in a Spanish prison from an apparent suicide at the age of 75.

In October, McAfee was arrested in Spain after being indicted in the U.S. on multiple counts of tax evasion. His death followed a ruling from Spain’s National Court that he should be extradited to the U.S. The Associated Press noted today, however, that the ruling was able to be appealed and any final extradition order also needed the approval of the Spanish cabinet.

At a hearing earlier this month, McAfee had argued that the charges against him by prosecutors in Tennessee were politically motivated and that he would spend the rest of his life in prison if he returned to the U.S.

The U.S. Department of Justice claimed that McAfee had failed to file tax returns between 2014 and 2018 despite receiving considerable income from promoting cryptocurrencies, consulting work, speaking engagements and selling the rights to his life story for a documentary. Although McAfee had not lived in the U.S. the entire time, American citizens, unlike those from other countries, are required to file U.S. federal tax returns and pay U.S. taxes even if they are paying income tax in their country of domicile.

McAfee was not facing only tax evasion charges. In March, the Justice Department charged McAfee with fraud and money laundering conspiracy crimes over his role in two cryptocurrency schemes.

In one case, it’s alleged that McAfee and an associate, Jimmy Watson Jr., undertook a scheme to promote cryptocurrencies with false and misleading statements to inflate their market price. They did so without disclosing that McAfee owned large quantities of the promoted coins. Those coins are then said to have been sold for a $2 million profit.

In another scheme, the Justice Department claimed that McAfee promoted initial coin offerings without disclosing and, in fact, concealing that the ICO issuers were compensating McAfee for the promotional tweets with a substantial portion of the funds raised from investors. 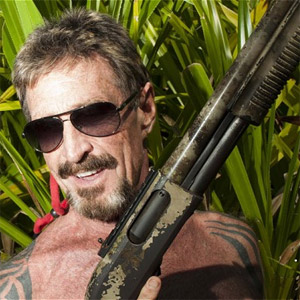 McAfee was perhaps the polar opposite to someone like Facebook Inc. Chief Executive Officer Mark Zuckerberg in an industry where bland tech plutocrats dominate. Saying he had a colorful life would be an understatement.

McAfee founded McAfee Associates in 1987, a company that created the first commercial antivirus software. He resigned from the company in 1994 and went on to found companies that included Tribal Voice, QuorumEX and Future Tense Central, among others.

Although the security company McAfee founded still bears his name today, John McAfee will likely be more remembered for his later exploits. After living in Belize for several years, McAfee was forced to go on the run after being a person of interest in the murder of American businessman Gregory Faull. In a series of exclusive interviews with SiliconANGLE, he detailed a tale that could be out of a movie with international espionage and more.

In 2015, he made a bid to become the Libertarian Party candidate for president.

In later years he became well-known for his cryptocurrency advocacy, famously saying in an interview that he would eat his dick on national television if bitcoin did not reach $500,000 by the end of 2020. It didn’t and he subsequently walked back the commitment.

In his last tweet on Twitter, McAfee wrote “in a democracy, power is given not taken. But it is still power. Love, compassion, caring have no use for it. But it is fuel for greed, hostility,  jealousy… all power corrupts. Take care which powers you allow a democracy to wield.”

McAfee is survived by his wife Janice Dyson.

Show your support for our mission by joining our Cube Club and Cube Event Community of experts. Join the community that includes Amazon Web Services and soon to be Amazon.com CEO Andy Jassy, Dell Technologies founder and CEO Michael Dell, Intel CEO Pat Gelsinger and many more luminaries and experts.

We are holding our second cloud startup showcase on June 16. Click here to join the free and open Startup Showcase event.

We really want to hear from you. Thanks for taking the time to read this post. Looking forward to seeing you at the event and in theCUBE Club.