Here’s What Happened to NVIDIA During the Last Crypto Crash

It’s starting to look like the cryptocurrency bubble is bursting. As of this writing, the price of Bitcoin (CRYPTO:BTC) has dipped below $30,000, erasing its gains for the year. Bitcoin is now down more than 50% from its all-time high.

Other cryptocurrencies are doing even worse. Ethereum (CRYPTO:ETH) is down nearly 60% from its high, and joke cryptocurrency Dogecoin (CRYPTO:DOGE) has crashed 75%.

Graphics chip developer NVIDIA (NASDAQ:NVDA) has been one beneficiary of the crypto bubble. The company’s graphics cards are useful for mining certain cryptocurrencies. This fact has boosted demand for graphics cards, contributing to shortages and high prices. 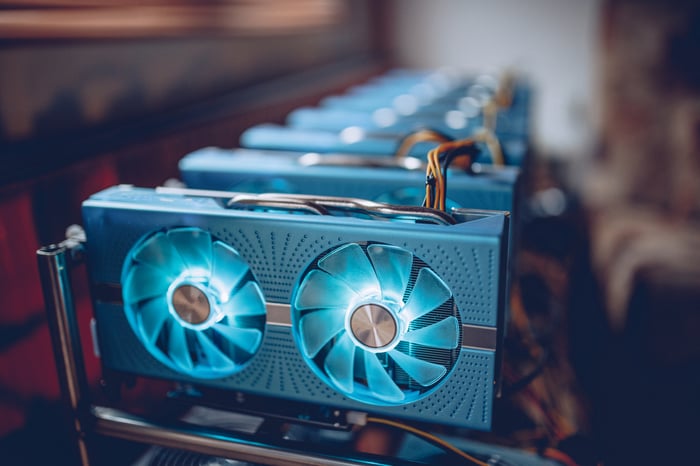 NVIDIA sells some models specifically aimed at cryptocurrency miners, but miners are also buying plenty of standard graphics cards through the same channels used by PC gamers. This makes it difficult to tell how much of NVIDIA’s gaming revenue is a side-effect of the cryptocurrency bubble. NVIDIA’s gaming revenue more than doubled year-over-year to $2.76 billion in its latest quarter.

What happens if crypto prices continue to crash? It wasn’t pretty for NVIDIA last time around.

From shortage to supply glut

The price of bitcoin and other cryptocurrencies soared throughout 2017 and early 2018. Miners snapped up graphics cards, leading to shortages and high prices. Sound familiar?

NVIDIA’s quarterly gaming revenue held steady at around $1.8 billion through the third quarter of fiscal 2019, which ended in October of 2018. Then it fell off a cliff as interest in cryptocurrency waned. Gaming revenue crashed below $1 billion in the fiscal fourth quarter of that year. 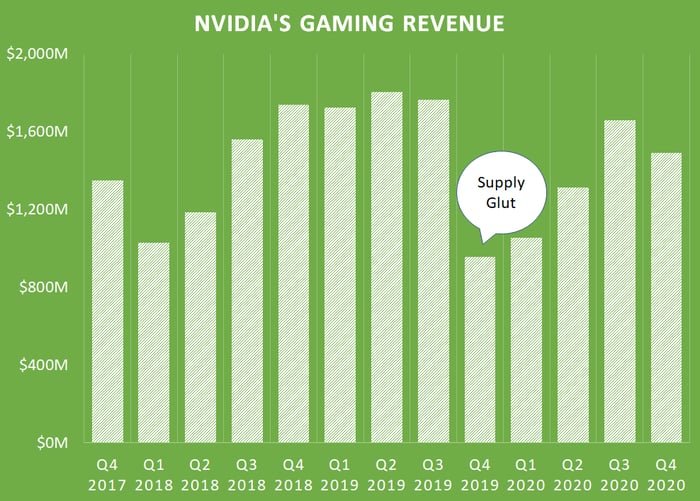 The crypto crash of 2018 led to bloated channel inventories of graphics cards, which reduced NVIDIA’s sales dramatically. Gaming revenue was depressed for about three quarters before bouncing back.

“Crypto mining demand and its after effects have distorted the quarter-to-quarter trends in the gaming business and obscured its underlying trend line,” NVIDIA CFO Colette Kress said during the Q4 2019 earnings call.

Kress continued: “…with the benefit of hindsight, we shipped a higher amount of desktop gaming products relative to where end demand turned out to be.”

What’s happening now is a turbocharged version of what happened in 2018. The total value of the cryptocurrency market at the peak this time around was far higher than in 2018, topping $2 trillion in April.

Actual shipments of graphics cards were up 24.4% in the first quarter on a year-over-year basis, according to Jon Peddie Research. The total value of those cards soared 370% thanks to inflated prices. Some of this demand has undoubtedly been driven by the pandemic, but a big chunk is tied to the fortunes of the cryptocurrency market.

Just like NVIDIA’s gaming revenue, NVIDIA stock was hit hard by the last crypto crash. Shares tanked in the final three months of 2018 as the extent of NVIDIA’s dependence on crypto miners demand became clear. 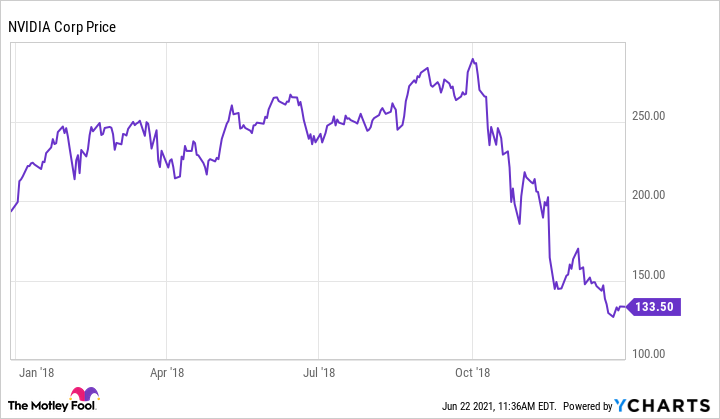 NVIDIA stock has once again surged amid a cryptocurrency boom and shortages of graphics cards. The company is now worth about $460 billion, about triple its peak value during the last cryptocurrency bubble. NVIDIA has made strides outside of gaming since then, particularly in the data center. But a big drop in revenue is possible, and perhaps likely, if crypto prices keep tumbling.