Dogecoin warning: Will Dogecoin reach heights of bitcoin? ‘Worst of the crypto industry’ 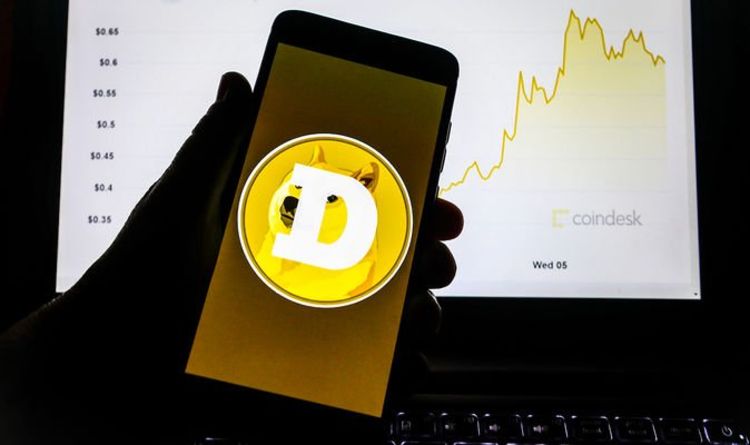 Cryptocurrency has boomed in recent years, with almost 2.5 million adults in Britain thought to hold some crypto assets to date. But even the crypto market leaders like bitcoin and Ethereum are incredibly volatile and have the capacity to drop significantly in value in an instant. Along with major players, there are smaller coins on the crypto market such as Dogecoin, which have gained a number of investors in recent months.

Based on a viral meme involving a Shiba Inu dog, Dogecoin has benefited in the past from mentions from billionaire Tesla CEO, Elon Musk.

Mr Musk tweeted earlier this year he wanted SpaceX to put a “literal Dogecoin on the literal moon”, prompting an outpouring of support for the crypto on Twitter.

Dogecoin enthusiasts consistently tweet their messages of support for the token, aiming to get Dogecoin “to the moon”.

But while supporters of Dogecoin may be loud on social media, cryptocurrency experts have their doubts over whether Dogecoin will ever reach the heights of the major cryptos like bitcoin or Ethereum.

“For those cryptos who have a serious place in the financial infrastructure – i.e. Bitcoin, Litecoin, Ethereum -are light years ahead in their projected values, as there is a multi-trillion dollar addressable market.

“Of course, there will be some people who revel in the anti-authoritarian nature of Dogecoin, or profit from price ping-pong day trading.

“Whilst it may appeal to the Elon Musk’s of the world, who embrace the novelty and comedy value as counter-cultural movement, its natural habitat is as a humorous anecdote over a beer, I am not sure it has any place in a portfolio.”

Jeremy Cheah, Professor of Crypto-Finance and Digital Investment at Nottingham Business School pointed out that there is currently a major difference between the price of bitcoin and the price of Dogecoin.

Professor Cheah told Express.co.uk: “I would struggle to see a scenario where Dogecoin will reach the level of other cryptos like bitcoin.

“It is not as robust as bitcoin and hence, it would be unlikely that Dogecoin will get to where bitcoin is.

“If it is an aspiration, then there is a huge gap between its current price and bitcoin price.”

The information in this article does not equate to financial advice.

Anyone considering investing in cryptocurrency should understand the risks involved.