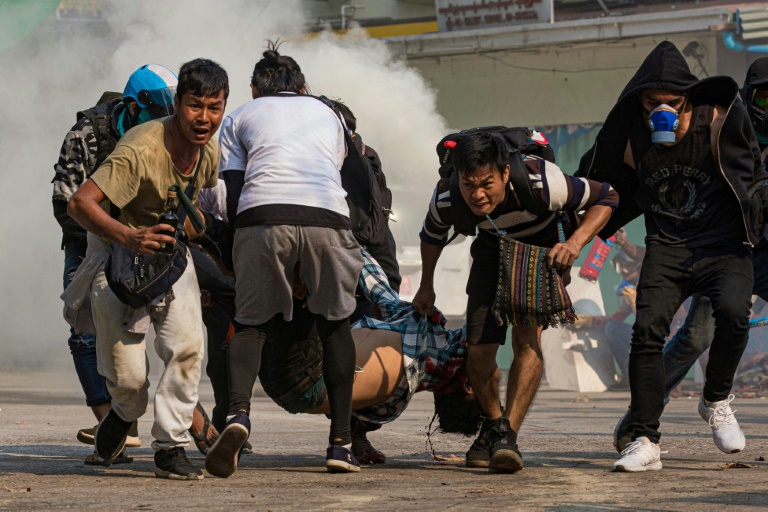 Protesters shot during rallies against Myanmar’s military regime are avoiding treatment for their wounds, fearing arrest if they visit junta-run hospitals and searching desperately for sympathetic doctors to operate on them in secret.

Security forces have fired on civilian protests with sniper rifles, machine guns and mortar rounds in the months since the February coup that ousted civilian leader Aung San Suu Kyi.

More than 800 people have been killed and thousands of others wounded in a running crackdown on opposition to the military regime, according to rights groups.

Maung Win Myo — his name and others have been changed for safety reasons — used to scratch a meagre living as a trishaw driver, ferrying people around the bustling commercial capital of Yangon.

But the 24-year-old hasn’t worked since March, when he was shot in the leg while on the frontlines of an anti-junta protest.

“I can’t even sleep properly at night,” he told AFP, wincing on a mattress on the floor of the one-room apartment he shares with his wife and two children.

It would cost about $950 to pay for a second operation at a private hospital to set the steel in his broken bone, he said, but he will have to keep on suffering for now.

“I don’t have any money as I cannot work,” he said, adding that he was relying on donations from neighbours to feed his family.

One costly visit to a private clinic has already left Maung Win Myo out of pocket.

“We didn’t dare to go to military hospital, that’s why we went to a private hospital, even though we don’t have money,” his wife said.

Many others with serious injuries are scared to seek free treatment at military hospitals, for fear their wounds will betray their involvement in anti-coup protests.

“Not everyone is willing to go,” Marjan Besuijen, Head of Mission for Medecins Sans Frontieres (MSF) in Myanmar, told AFP.

In a report last month, MSF also said its partners in Myanmar had witnessed junta raids on organisations “providing first aid to injured protesters, and seen their supplies destroyed.”

Military hospitals are not normally open to the public but the junta has expanded their operations after many doctors walked off the job after the coup.

The strike, also joined by huge numbers of civil servants and other government employees, has forced the closure of almost all public hospitals in the country.

It has also cripped the economy and put a huge strain on the banking system.

Those lucky to still have jobs and savings face day-long queues at ATMs to withdraw a maximum of $120 per week, leaving many struggling to pay for food and rent — let alone surgery.

Ngwe Nu Nu’s husband was shot in the eye by security forces on his way to work at a rice broker’s in the central city of Myingyan in late April.

The main breadwinner in the family, he was taken to Mandalay for treatment, but died in hospital a few days later, leaving Ngwe Nu Nu alone and indebted for his treatment.

“I tried my best to save his life,” she told AFP. “Now I don’t know how to survive without him.”

As the coup enters its fifth month — and with customs officials among those striking — sourcing medicine is also getting harder.

For the last month “we have had difficulties in getting some medical materials for operations,” as stockists run out, one doctor treating wounded protesters in Mandalay told AFP.

“If this lasts longer, it will impact more seriously on the patients,” the doctor said, on condition of anonymity.

Mother of three May Win, 50, is also unable to work after she was shot in the hand two months ago while protesting against the junta in Mandalay.

Sympathetic doctors put steel into her broken thumb for free, but over a month later, the injury has not fully healed.

“I used to go to work by driving a motorbike, but now I won’t be able to work anymore,” she told AFP.

But she also vows to go back out to protest when her hand is fully healed.

“I will go out again to fight because we must fight for our next generation and for our country until this battle ends,” she told AFP.