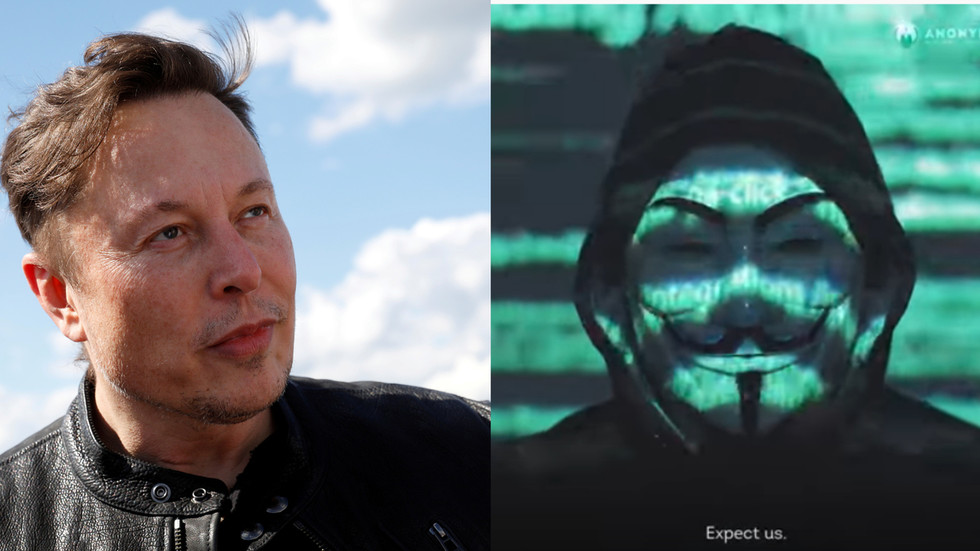 A group claiming to be part of the Anonymous movement has called for war with Elon Musk, accusing the Tesla founder of manipulating cryptocurrencies, among other alleged sins, and suggesting that he faces a battle ahead.

“You may think you are the smartest person in the room, but now you have met your match,” the group said in a video message posted Saturday on a verified ‘Anonymous’ YouTube channel with some 145,000 subscribers as well on its Twitter with over 5.8 million followers.   “We are Anonymous. We are legion. Expect us.”

Musk, who also founded SpaceX and ranks as the world’s third-richest person with a fortune estimated at $151 billion, apparently raised the ire of the group with recent tweets that caused bitcoin prices to tumble. The digital currency dropped more than 6% on Friday, after he posted a meme of a couple breaking up below symbols for bitcoin and a broken heart.

“Millions of retail investors were really counting on their crypto gains to improve their lives,” ‘Anonymous’ said. “This is something that you will never understand because you were born into the stolen wealth of a South African apartheid emerald mine and have no clue what struggle is like for most of the working people in the world.”

While acknowledging that bitcoin investors know they should expect market volatility, ‘Anonymous’ said Musk showed “clear disregard” for working people. “As hardworking people have their dreams liquidated over your public temper tantrums, you continue to mock them with memes from one of your million-dollar mansions,” the message said.

The group also accused Musk of exploiting child labor in overseas lithium mines and damaging the environment. It said he faces a reckoning with reality as his sterling public image begins to unravel.

“You have enjoyed one of the most favorable reputations of anyone in the billionaire class because you have tapped into the desire that many of us have to live in a world with electric cars and space exploration,” the group said. “But recently, your carefully created public image is being exposed, and people are beginning to see you as nothing more than another narcissistic rich dude who is desperate for attention.”

Musk may have been replying cryptically to the broadside when he posted a tweet later on Saturday, saying, “Don’t kill what you hate, save what you love.” He also said earlier, “Goods and services are the real economy. Any form of money is simply the accounting thereof.”

Don’t kill what you hate,Save what you love

The message had been viewed more than 740,000 times on YouTube at the time of writing. Many observers suggested that the group could do significant damage to the billionaire.

“Since Anonymous released a video exposing Elon Musk, might I suggest a nice hiding place?” a Twitter user known as Rowan Moon asked. “I hear Mars is a good option. Perhaps you could take Trump and his spawns with you.”

Since Anonymous released a video exposing Elon Musk…might I suggest a nice hiding place. I hear Mars is a good option. Perhaps you could take Trump and his spawns with you…..😏#Truth2Voice

However, there has also been a debate whether the group is genuine and if so, which offshoot of the leaderless movement is behind the ominous video, since it is decentralized.

One Anonymous group on Twitter, @YourAnonNews, which boasts 6.7 million followers, denied its involvement, while at the same time seemingly endorsing the message. The group wished “all the best” to the bitcoin and digital currency supporters “in their ongoing spat with Elon Musk,” suggesting another Anonymous group – @BscAnon was behind the viral clip.

However, BscAnon also distanced itself from the video. “That Is Not Our Video To Elon Musk for the record,” the group said.

While some rushed to label the clip “fake”, YouTuber and crypto enthusiast Meet Kevin argued that there is no point in tracing the video, since Anonymous has always been “a decentralized movement with multiple chapters.”

“Remember, this is a decentralized movement with multiple chapters — so one denying doesn’t mean the other chapters aren’t involved & vis versa,” he tweeted.

A lot of confusion over whether or not the Anonymous video was fake. This Anonymous group is sharing it. Others deny it came from them. Remember, this is a decentralized movement with multiple chapters — so one denying doesn’t mean the other chapters aren’t involved & vis versa. https://t.co/wX9mx8TzO0