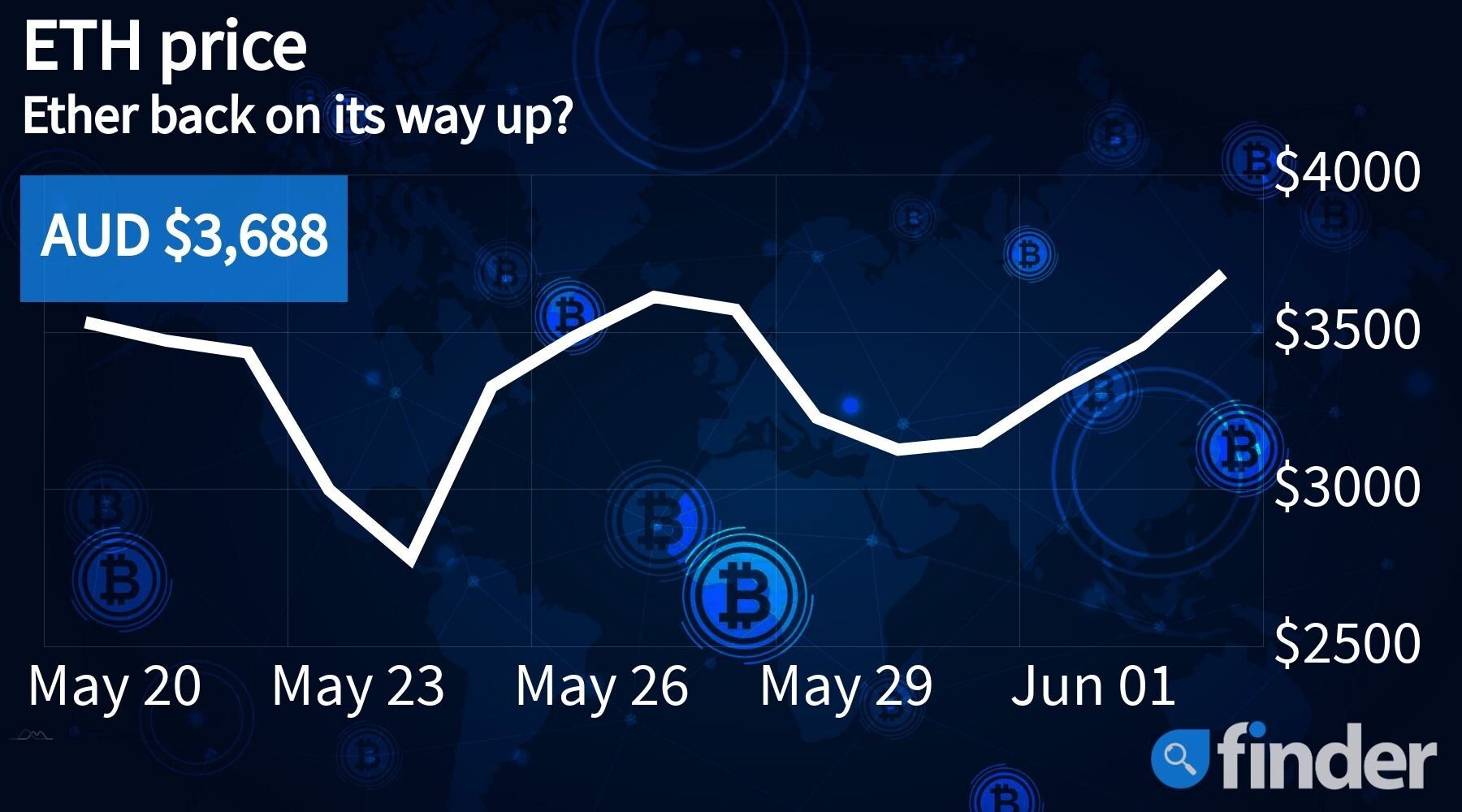 Image: Ether back on its way up?

Meta: Ether has showcased an increasing amount of stability over the last couple of weeks.

Barring a 24-hour time window between May 23-24, the value of Ether, the world’s second largest cryptocurrency by total market capitalization, has continued to hover around the AU $3,250 mark. Infact, over the past week, ETH has dipped by a mere 1%, thereby suggesting that the ongoing bear market may finally be coming to a close. At press time, the premier altcoin is trading at AU $3,500.

To gain a better idea of where Ether might be headed in the near future, Finder spoke with Todd Crossland, CEO of cryptocurrency exchange CoinZoom. He pointed out that with each passing day, we are continuing to see an increasing level of ETH adoption across the global digital currency landscape, adding:

“The only thing holding Ethereum back right now is the painfully expensive proposition of using ETH in DeFi, NFT’s, or any other application. With Ethereum’s upcoming update to proof of “stake”, instead of proof of “work”, Ethereum has the potential to reach US $10,000 (AU $13,000) in the next year.”

How to buy Ethereum

Since the beginning of May 2021, it is worth noting that Ether has been able to outperform BTC in a big way, gaining 32% on the flagship crypto. That being said, derivatives data seems to indicate that professional traders are not bullish on the top altcoin even though legacy institutions such as JPMorgan Chase and Goldman Sachs have recently released reports indicating a bullish outlook in regard to the crypto market as a whole.

In addition to this, it is also worth noting that the “Crypto Fear and Greed Index” — a metric used to gauge public interest and sentiment regarding Bitcoin and other top cryptos — dipped to its lowest levels in more than 15 months recently. Not only that, even as fears of volatility continue to run amuck, global trading giant Guggenheim Investments revealed that it had filed for a new fund that may seek exposure to Bitcoin with the United States Securities and Exchange Commission (SEC).

As the market continues to consolidate and recover, Ethereum has been continuing to grow, with the project recently overtaking Bitcoin in terms of miner revenue and network value transacted. On the subject, a report from Goldman Sachs revealed that in the coming future, ETH has a good chance of surpassing BTC as a “dominant store of value.”

In this regard, one can see that over the course of May, Ether miner revenue (touted to be around US $76 million per day) outpaced that of Bitcoin’s return ratio of US $45 million. Lastly, the Ethereum network’s daily transaction load has been growing at a rapid rate, with the ecosystem currently handling a whopping $25 billion (AU $32.5 billion) worth of transactions per day, a figure that is 85% higher than that of Bitcoin’s.

Interested in cryptocurrency? Learn more about the basics with our beginner’s guide to Bitcoin, dive deeper by learning about Ethereum and see what blockchain can do with our simple guide to DeFi.

Disclosure: The author owns a range of cryptocurrencies at the time of writing

Disclaimer: This information should not be interpreted as an endorsement of cryptocurrency or any specific provider, service or offering. It is not a recommendation to trade. Cryptocurrencies are speculative, complex and involve significant risks – they are highly volatile and sensitive to secondary activity. Performance is unpredictable and past performance is no guarantee of future performance. Consider your own circumstances, and obtain your own advice, before relying on this information. You should also verify the nature of any product or service (including its legal status and relevant regulatory requirements) and consult the relevant Regulators’ websites before making any decision. Finder, or the author, may have holdings in the cryptocurrencies discussed.