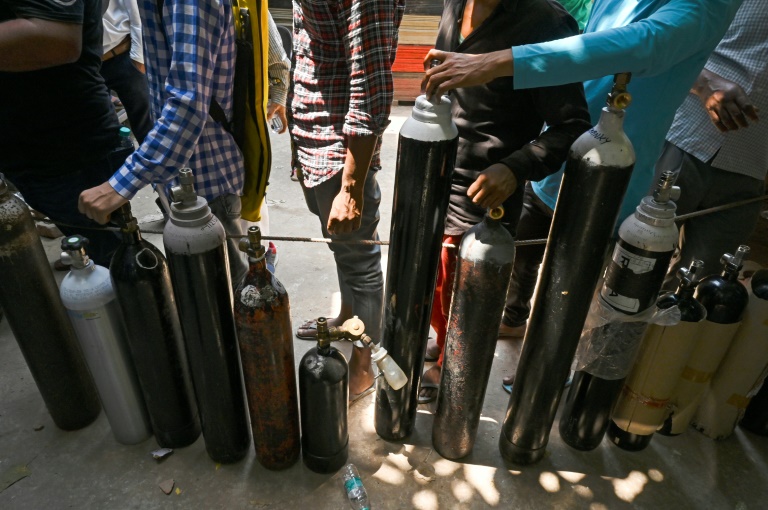 From fake medicines to fire extinguishers disguised as oxygen cylinders and recycled personal protective equipment, India’s coronavirus hell has been lucrative for its ever-inventive army of scammers, with sometimes deadly consequences.

Komal Taneja’s husband Chandrakant died gasping for breath at his New Delhi home last month after the oxygen canister that they paid $200 for on the internet never arrived.

“We desperately tried to find a hospital bed for a week… Two private hospitals asked us for a million rupees ($13,800) in advance,” Komal, her voice cracking on the phone, told AFP.

“Then we came across a contact online promising an oxygen cylinder delivery within an hour of making the 15,000 rupees payment. When we did, they asked for more money, and then stopped responding,” Komal added.

Chandrakant, 36, who worked at the stock market, died on May 1, leaving his homemaker wife looking for a job to help look after his ailing parents.

India has a long history of audacious scams ripping off ordinary people, including beyond its borders.

In just one typical case, in December police busted a call centre that allegedly defrauded 4,500 Americans out of $14 million.

Impersonating US officials, they told victims that their bank accounts were being used by drug cartels and that the only option was to convert their assets into bitcoin — which the gang would then cash in.

One elaborate scam involving police and doctors that emerged in 2019 saw hundreds of villagers in Haryana declared dead in road accidents to claim insurance.

Investigators say many scammers have turned their attention to ripping off desperate Covid-19 patients and relatives as India suffers a devastating coronavirus surge.

Narang, a private company executive in Noida, said he was swindled by a sophisticated scam when he was desperately looking for an oxygen concentrator for a sick friend.

“I came across a link for a supplier which looked genuine, and even had a catalogue with different models. The prices too were competitive,” Narang told AFP.

“I spoke with a person on the phone. He asked for about 45,000 rupees in two instalments. I was sure it was genuine and even recommended this supplier to another acquaintance.

His case is one of at least 600 investigations launched by police in New Delhi alone in recent weeks with people desperately looking for oxygen, hospital beds and drugs.

“These criminals saw it as an opportune moment to make an entry,” senior Delhi police officer Shibesh Singh told AFP.

His Crime Branch teams have already arrested many scammers, including a gang that made and sold counterfeit doses of the antiviral drug Remdesivir for up to 40 times the market price.

“These people were producing fake vials which cost them about 20 rupees and (they) sold it in the market for anything above 10,000 rupees,” Singh said.

In another case, a gang repainted fire extinguishers and sold them as oxygen cylinders, while another posed as doctors offering non-existent hospital beds.

This week, six men were reportedly arrested on suspicion of washing, repackaging and selling several tonnes of used surgical gloves from hospitals.

“We can only urge the people to be extra cautious while approaching such contacts for online help,” Singh said.

Some victims are demanding tough punishments.

“Hang them all,” said Narang.

“If not that, then the government should ensure life imprisonment. This isn’t just mental or financial, they are playing with human life.”