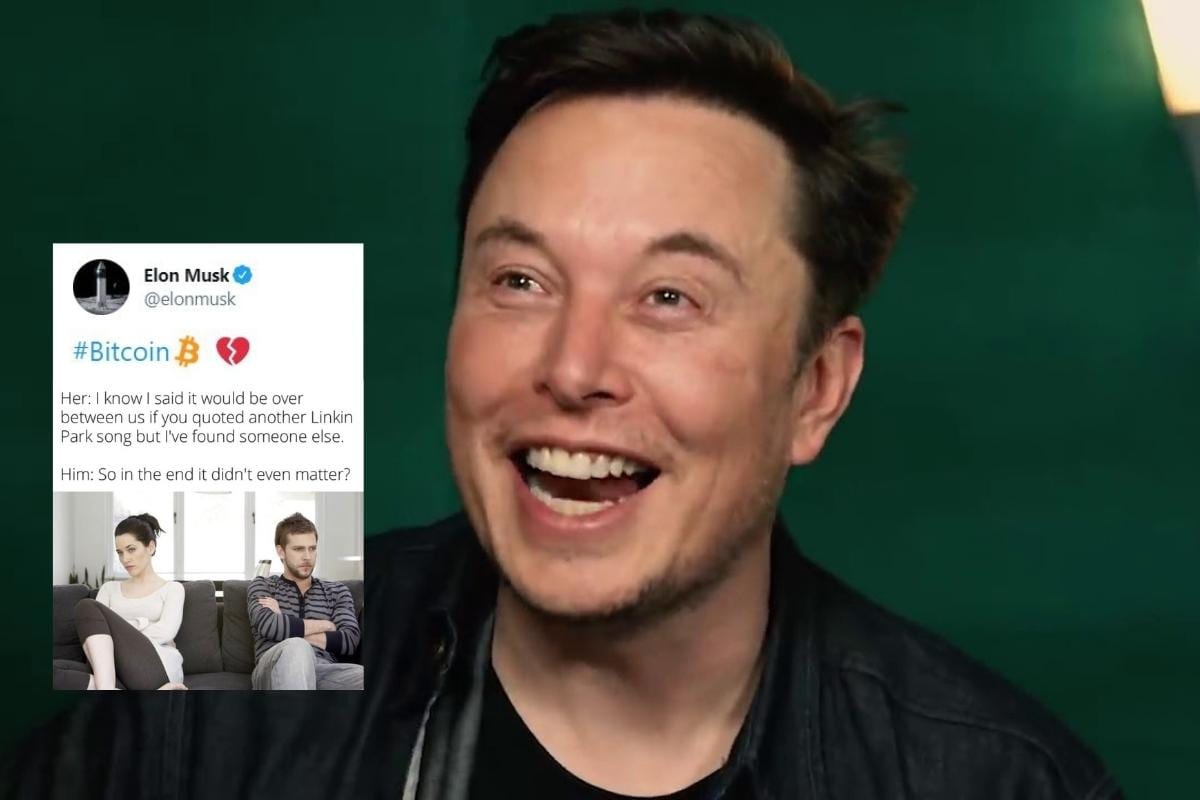 Elon Musk is the Tesla CEO, SpaceX boss, poster of stolen of memes on the Internet, and a little too invested in talking about popular cryptocurrencies on Twitter. And keeping with his tipsy-topsy turn on cryptocurrency, Another day, another Musk tweet, and another manipulation of the cryptocurrency market? Tesla CEO and SpaceX boss, Elon Musk has been awarded an unsaid Internet award, where the fluctuations of prices in the cryptocurrency market has been attributed to him. His reach, however, is sometimes more than cryptocurrency – tech and space enthusiasts hang to every word the entrepreneur posts on his Twitter, which sometimes are memes, and a lot of time, they’re simply sh*tposts. Musk’s tweets on a virtual platform managing to create fluctuation in prices of real-world things even has earned a new term: ‘The Musk Effect.’ Musk appears to have done it again.

In the early hours of Friday, Musk posted (probably a stolen) meme on a Linkin Park song with the popular line ‘In the end it doesn’t even matter,’ with just the caption, ‘Bitcoin,’ followed by a broken heart emoji.

Following Musk’s tweet the value of Bitcoin cryptocurrency dipped – according to Coindesk, after Musk’s tweet it dropped as low as 37,660. After the dip, Musk posted yet another meme – this one an ironic one on the dip in Bitcoin values.

This is not the first time Musk has led to a fall in cryptocurrency prices. It isn’t even the second, or third.

On May 20, the world’s largest cryptocurrency has erased all the gains it clocked up following Tesla Inc.’s Feb. 8 announcement that it would use corporate cash to buy the asset and accept it as a form of payment for its vehicles. Now traders are bracing for more pain as the token breaches a key technical level. A statement from the People’s Bank of China on Tuesday reiterating that digital tokens can’t be used as a form of payment added to the selloff.

Earlier that week Musk announced that Tesla is suspending purchases with Bitcoin which triggered a slide in the digital currency. In a post on Twitter Wednesday, Musk cited concerns about the “rapidly increasing use of fossil fuels for Bitcoin mining and transactions,” while signalling that Tesla might accept other cryptocurrencies if they are much less energy-intensive. He also said the company won’t be selling any of the Bitcoin it holds.

Musk’s move comes after Tesla disclosed in February that it had purchased $1.5 billion in Bitcoin and planned to accept it as payment. That announcement added legitimacy to the cryptocurrency as an increasingly acceptable form of payment and investment, especially coming from a large member of the S&P 500 with a high-profile CEO who commands a big following among retail investors and the general public. Tesla’s website earlier also had a support page dedicated to Bitcoin, noted that Bitcoin was the only cryptocurrency that Tesla accepts in the continental U.S.