ATLANTA, June 2, 2021 /PRNewswire/ — This year, Dad deserves a whale of a Father’s Day – and that’s why Carvel Ice Cream is bringing back two beloved pieces of its history to help celebrate everything that makes Dad special: the classic Fudgie the Whale® Father’s Day commercial complete with a Carvel hotline, and Fudgie the Beer.

“Carvel and Fudgie the Whale are an iconic duo when it comes to celebrating dads,” said Nicolle DuBose, Vice President and Chief Marketing Officer, Carvel. “By reviving some Carvel and Fudgie favorites this Father’s Day, we’re honoring all the moments cherished with dads throughout the years and the new memories yet to be made.”

Fudgie the Whale is synonymous with celebrations – especially Father’s Day, the holiday for which Carvel originally created the mascot in 1977. Showcased across pop culture for decades, Fudgie’s loveable character brings Carvel fans young and old back to their childhood roots.

Beginning today, fans can check us out on YouTube to watch a modern take on the classic Father’s Day commercial featuring Fudgie and a re-creation of a gravelly voice many may know or recognize, and even have memories of growing up watching Carvel commercials on TV. The commercial also highlights the reinstated Carvel hotline – 1-833-FUDGIE1 – where fans can hear “Tom Carvel” serving up dad jokes. Warning: these dad jokes may get a little cone-y (get it, cone-y?)!

While Fudgie the Whale cakes cannot be ordered directly through the hotline, they are available at participating Carvel shoppes and on food delivery platforms. Visit Carvel.com/fathersday to find a Carvel shoppe and delivery availability ? you can even find some throwback Fudgie merchandise for Dad this Father’s Day.

Fudgie the Beer is Back!

In addition to the re-created commercial and hotline, Carvel is teaming up with Captain Lawrence Brewing to re-release the popular Fudgie the Beer, which quickly sold out after its original 2018 and 2019 releases. 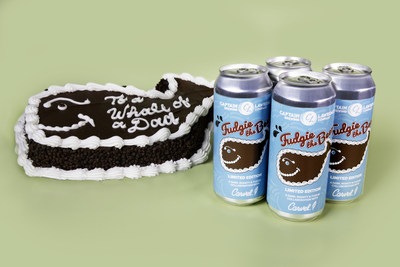 Brewed with 6-percent ABV and Carvel’s signature chocolate Crunchies, rich fudge and ice cream, Fudgie the Beer is the perfect dark, roasty and fudgie Father’s Day treat – and will give Dad a little something extra to make this Father’s Day a whale of a celebration.

Fudgie the Beer will be available leading up to and after Father’s Day, while supplies last, at finer retailers wherever Captain Lawrence is sold across the East Coast. Visit FudgietheBeer.com or call 1-833-FUDGIE1 for more information. Must be 21+ to purchase.

About Carvel Ice Cream
The United States’ first retail ice cream franchise, Carvel® Ice Cream has become one of the best-loved and most recognized names in its industry. The company is a leading provider of premium soft ice cream and hand dipped ice cream products, as well as uniquely shaped ice cream cakes, including its signature Fudgie the Whale® and Cookie Puss® cakes. Atlanta-based Carvel currently has more than 400 franchised and food service locations. Visit www.carvel.com for more information, follow us on Twitter @CarvelIceCream and Instagram or become a fan on Facebook.

Captain Lawrence Brewing Co. is located just a short drive north of New York City, in Westchester County, NY, where it is the area’s largest craft brewery, producing over 28,000 barrels of beer annually. Founded in 2006 by Scott Vaccaro, Captain Lawrence brews a wide range of beer styles, producing as many as one hundred brands in a year. Shortly after opening, the brewery began to gain widespread notoriety for their sour and barrel-aged beers, winning their first of eight GABF medals in 2007. Today, in addition to their award-winning sour beers, Captain Lawrence is widely known for brewing extremely Fresh IPAs, highly drinkable lagers, and a variety of specialty craft beers. Learn more at CaptainLawrenceBrewing.com and keep up with the Captain on Instagram @CaptLawrence