S&P 500 in a tight range with bearish undertones in the credit markets – but where is the decline? Given the ample Fed support, don‘t count on too much unless the 4,180s zone gives in yet again. Highly unlikely according to the VIX, and even option traders have turned more complacent again. The S&P 500 may be in a precarious balance all it wants, but will gladly take any bullish clue (hello, unemployment claims) – unless the markets lose the faith in the Fed, the bulls are quite safe:

(…) For now, it appears that the Fed trial balloons (Kaplan, even Yellen – thinking about talking taper, suggesting rate hikes) have worked in dialing back the inflation trades to a degree (stock market correction isn‘t thus necessary for players to pile into Treasuries) – more about the Fed‘s „coming soon“ taper bluff.

The market simply isn‘t convinced the Fed is serious about taking on inflation through (gradual) removal of the punch bowl – or about shaping its forward guidance credibly this way (yet). Inflation expectations are cooling down a little, and the Treasury market is tracking them closely. But this doesn‘t mean that bonds are taking the central bank seriously – this move is part and parcel of the transitory vs. getting (practically permanently unless a Fed game changer arrives – still unlikely) elevated inflation readings debate.

The much-awaited Jun 10 CPI readings would likely come on the hotter side of the spectrum but would be part and parcel of a continued move to a higher inflation environment where commodities‘ pressures are amplified by job market ones – not that the distortions and disincentives to work wouldn‘t be there.

While inflation expectations dipped a little yesterday, bond yields mostly refused to decline – that‘s a short-term phenomenon, a daily noise worth keeping an eye on, together with the performance of red hot commodities. Copper being in better shape, with sound fundamentals underlined by the speculative stockpiling, rose a little yesterday, but lumber lacking the longer-term advantage of timber confirming its advance, reversed to the downside.

Commodities are for now a mixed bag in consolidation mode, but their secular bull market is unquestionable, and so far it‘s only the precious metals that are calling the Fed‘s taper bluff. All the excess liquidity has to find a home somewhere, and it‘s in the financial markets, driving up asset prices – with the pace of appreciation the only variable until Fed‘s true game-changer arrives. Again, that‘s unlikely.

Precious metals are behaving as if the inflation battle has been lost, with all that‘s going on being about managing perceptions only. And boy and girl, these are attended to finely – the Fed balance sheet keeps expanding but inflation is cascading through the PMI, PPI, and CPI. The lull having arrived would prove of fleeting shelf life as I am looking for the inflation fires to reignite in the autumn surely.

Crude oil is refusing to budge much and keeps (bullishly) consolidating near the upper end of its recent range, with the oil index not too visibly underperforming.

Bitcoin and Ethereum are recovering in fits and starts, and have rejected overnight downside. That‘s encouraging, and the picture keeps turning bullish especially for the latter. With Bitcoin, the upper border of the $38,000 – $40,000 zone hasn‘t been cleared yet, but the signs from both Ethereum and Cardano are strong already. No matter the many hit jobs (another China miner one for ESG superficial consumption), unless punitive taxation of crypto profits and/or digital national currencies arrive, the market is safe from another takedown. In this light, the summer Fed report on cryptocurrencies could be insightful, but don‘t pin your hopes for great impact too high.

Let‘s move right into the charts. 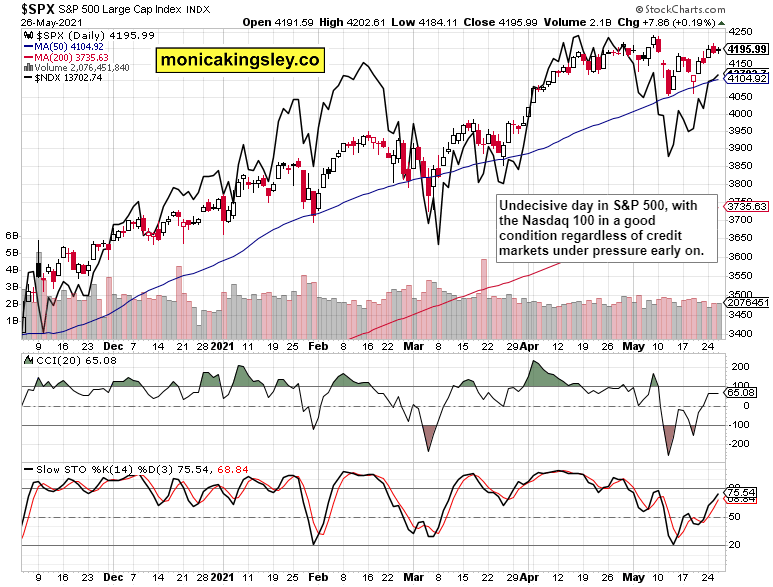 S&P 500 took a daily breather unlike Nasdaq 100, but everything isn‘t fine below the surface.

The struggling corporate credit markets epitomize the daily uncertainty. The long-dated Treasuries rise doesn‘t appear to be over, which would underpin especially Nasdaq 100.

Tech was driven just by $NYFANG yesterday, pointing to the strong risk-off nature of yesterday‘s session – in spite of solid VTV performance. These two messages are non-congruent.

Gold is short-term perched high, especially should nominal yields rise some more than they did yesterday. Coupled with the tamed inflation expectations of latest days, the yellow metal is short-term vulnerable.

Silver is taking the copper to 10-year Treasury yield cue, and would be more volatile than gold in the near term. 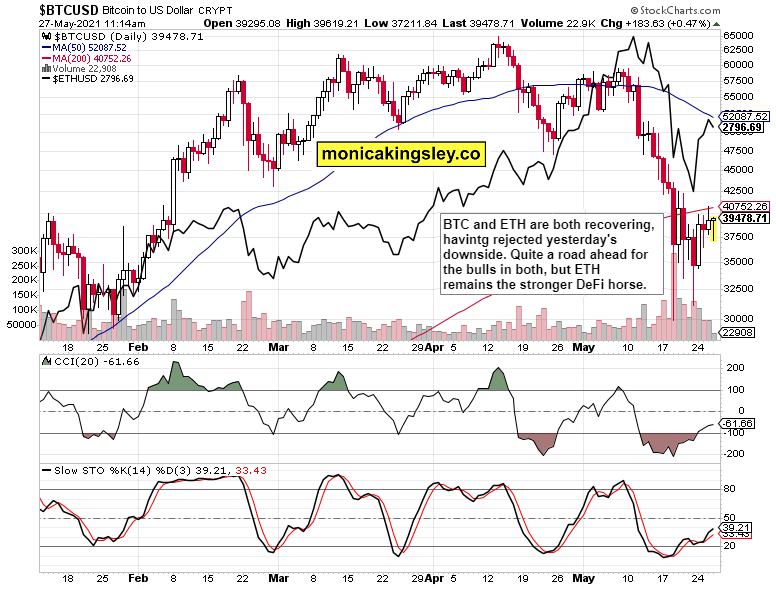 Ethereum is taking a daily breather while Bitcoin is working off its prior retreat. The pressure to go higher is slowly building.

S&P 500 is likely to remain choppy with a general upward bias that only a clear break of 4,180 would invalidate, which is unlikely to happen though.

Gold and silver upswing would be on sounder footing when the miners decide to join and do away with the stark non-confirmation. Dips are still being bought.

Bitcoin and Ethereum are likely to continue their recovery, but it won‘t happen in a clear line pointing one way.