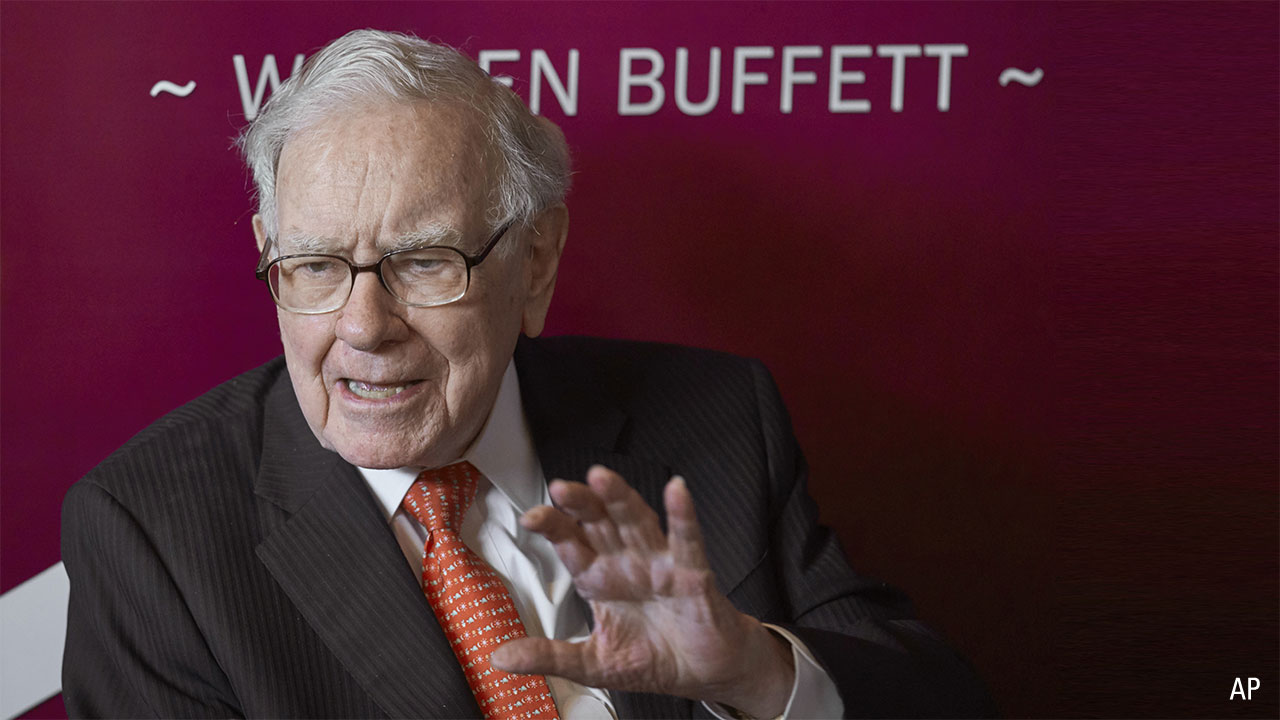 Co-authored with Susan Dziubinski, director of content for Morningstar.com.

These days, everyone wants to know what Ark’s Cathie Wood is buying and selling. It’s not difficult to figure out why. Wood’s actively managed ARK Innovation ETF (ARKK) returned a stunning 153 per cent last year. Naturally people are curious about what she’s investing in to generate those kinds of results.

An antidote to all the talk about hot stocks and speculative emerged last weekend at Berkshire Hathaway’s annual general meeting. Warren Buffett displayed his thoughtful, fundamentals-based approach to investing, touting the virtues of buying the market and holding it, forever. His ideas may seem out of touch in a market where Tesla (TSLA) trades at a 99 per cent premium to Morningstar’s fair value estimate, Elon Musk is sending Dogecoin to the moon and social media is considered a valid source of stock tips. Buffett has also been accused of being out of touch with the modern economy and for “betting against” America during the pandemic. The first shareholder question asked at the meeting demonstrates this:

“Mr. Buffett, you’re well known for saying to be fearful when others are greedy and be greedy when others are fearful. But by all appearances, Berkshire was fearful when others were most fearful in the early months of COVID, dumping airline stocks at or near the low, not taking advantage of the fear of gripping the market to buy shares of public companies at exceptional discounts and being hesitant to buy back significant amounts of Berkshire stock at very attractive prices. I’d appreciate hearing your thoughts surrounding this time…”

You would be hard-pressed to find someone who doesn’t believe there is room for ultra-aggressive investing (or speculation, as many would call it) in some portfolios. That’s what dollars earmarked as “mad money” are for. But mad money is money you can afford to lose. It’s not the money you’re relying on to build wealth to fund retirement, buy a home, or finance any other goal. You need “sane money” (and a decent savings rate) to bankroll those dreams.

The good news is that the sane money approach isn’t complicated, as Buffett noted in his annual letter to shareholders earlier this year: “All that’s required is the passage of time, an inner calm, ample diversification, and a minimisation of transactions and fees.”

Looks like investors today can still learn quite a bit from Buffett.

Here are some lessons the Oracle of Omaha sought to impart to first-time investors. The short of it: the average person can’t pick stocks; most investors would benefit from purchasing an S&P 500 index fund over the long term.

“I would like particularly new entrants to the stock market to ponder just a bit before they try and do 30 or 40 trades a day in order to profit from what looks like a very easy game.” (Warren Buffett, Annual Shareholders Meeting, March 2021)

Buffett took time to remind investors, particularly newer investors, of the extraordinary things can happen in stock markets. To illustrate this, he ran a list of the 20 largest companies in the world by stock market value (on 31 March 2001). Apple (AAPL) was number one with just over $2 trillion – LVMH Moët Hennessy Louis Vuitton (MC) at number 20, worth around $330 billion.

MORE ON THIS TOPIC: How to invest like Warren Buffett

“None. Zero. There were then six US companies on the list and their names are familiar to you. We have General Electric, way of Exxon, we have IBM Corp. None made it to the list 30 years later, it was zero,” he said. 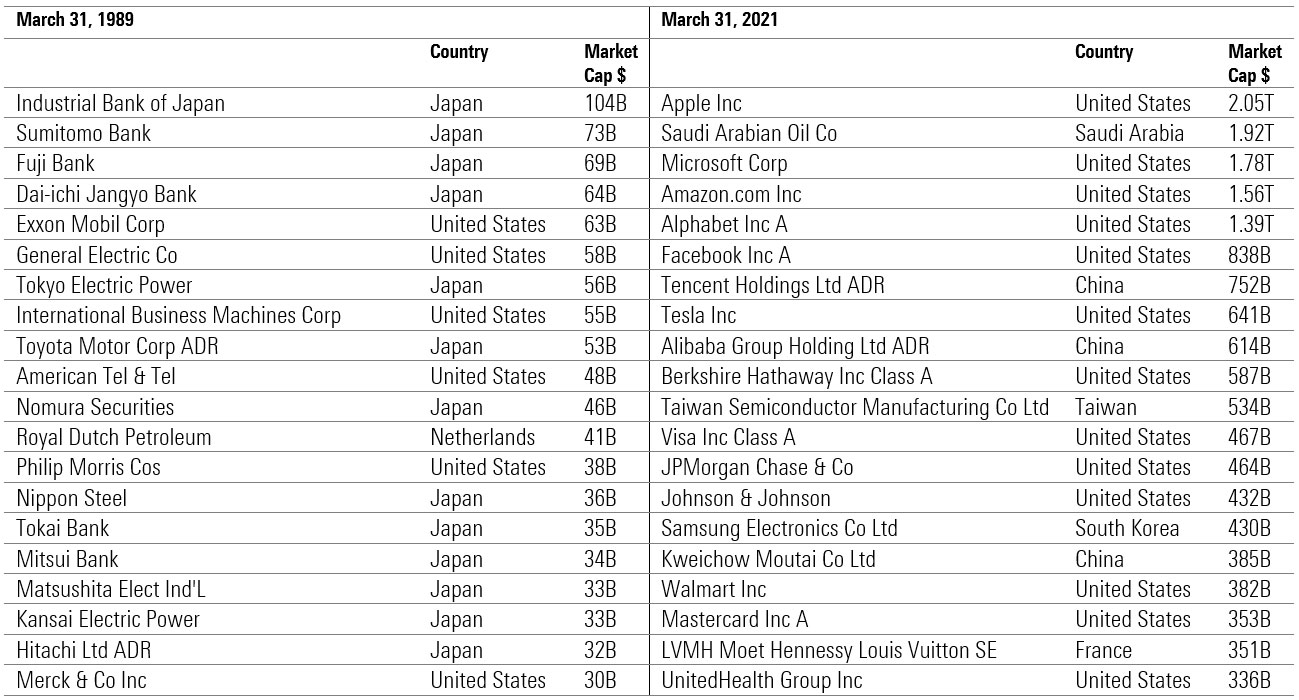 Buffett then invited the audience to think about how many of these companies will still be on the list in 30 years.

The lesson for investors, Buffett said, is that the world can change in very dramatic ways. Don’t get too sure of yourself.

“You’d think it could be repeated now that 30 years from now that you could take 2 trillion for Apple and multiply any company and come up with 30 times after the leader,” he said.

“Yeah, it seems impossible and maybe it is impossible, but we were just as sure of ourselves as investors and Wall Street was in 1989 as we are today, but the world can change in very, very dramatic ways.”

Investing themes are attractive. Don’t fall for them

Buffett said the best thing first-time investors can do is to be in the market.

“The main thing to do is to be aboard the ship. A ship,” he said.

“They were all going to a better promised land, you just have to know which one was the one that necessarily get on.

“But you couldn’t help but do well if you just had a diversified group of equities (US equities would be my preference) but to hold over a 30-year period.”

To illustrate this point, Buffett said investors are attracted to popular industries, whether that be railways in the mid-1950s or tech companies today. But picking the winners and losers in an industry is incredibly difficult. For example, Buffett said in 1903 the “place to be” was the auto industry. The thesis was that someday 290 million cars would be buzzing around the US. However, there were at least 2,000 companies that entered the auto business. In 2009, there were three left, two of which went bankrupt.

MORE ON THIS TOPIC: Digging into Berkshire Hathaway’s portfolio

“There’s a lot more to picking stocks than figuring out what’s going to be a wonderful industry in the future,” Buffett said.

“The Maytag company put out a car. Allstate put out a car. DuPont put out a car. I mean, Nebraska, there was Nebraska Motor company. Everybody started car companies just like everybody’s starting something now that can be where you can get money from people.

“But there were very, very, very few people that pick the winner.”

During the Q&A portion of the meeting, Buffett was asked about whether long-term Berkshire shareholders should continue holding their stock or diversify their risk across an index. The question comes after Berkshire Hathaway’s stock underperformed the S&P 500 index by -18.48 per cent in calendar year 2020. Buffett expressed a preference for holding the market.

“And I’ve never recommended Berkshire to anybody, because I don’t want people to buy it, because they think I’m tipping them into something I’d never. No matter what it was selling for. And I’ve made it public. On my death, there’s a fund for my then-widow, and 90 per cent will go into an S&P 500 index fund, and 10 per cent in bonds.

“…I like Berkshire, but I think that a person who doesn’t know anything about stocks at all, and doesn’t have any special feelings about Berkshire, I think they ought to buy the S&P 500 index.”

“I know that many people learned about investing through their Disney shares yadda yadda but I think we need to be clearer about this when we discuss financial education,” she wrote on Twitter last year.

“So much ink has been spilled discussing the failings of active managers. But we haven’t talked enough about how poorly many small investors are apt to do with individual-stock purchases, especially if they’re just learning.” 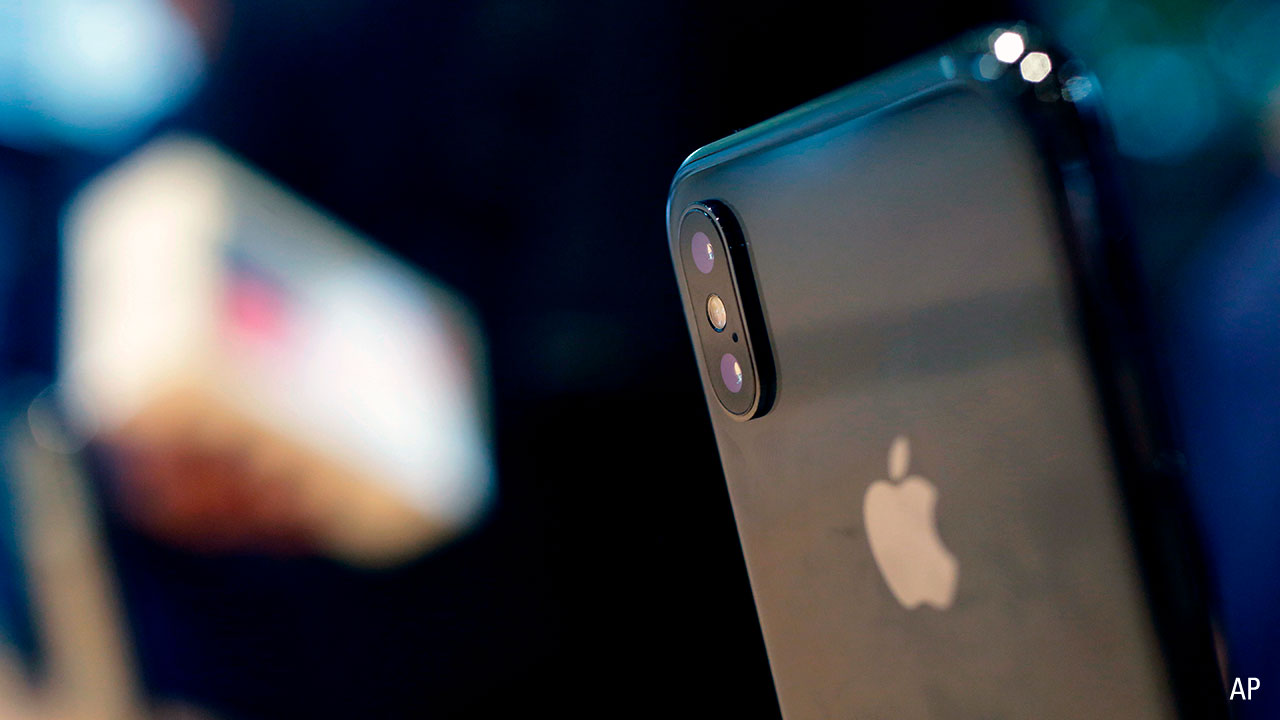 “If you cater to those gambling chips, when people have money in their pocket for the first time, and you tell them they can make 30 or 40 or 50 trades a day, and you’re not charging them any commission, but you’re selling their order flow or whatever, I hope we don’t have more of it.”

Buffett himself admitted to a few mistakes, including selling some of the firm’s Apple stock last year, and the healthcare venture he started with JP Morgan and Amazon that folded this year. He stuck to his decision to pull out of airlines early in the pandemic despite the sector roaring back to life. He praised the swift actions of the Federal Reserve and credited the institution with the US recovery.