There are plenty of reasons to think that the Bitcoin market will continue to go higher based upon the technical analysis alone.

Although bullish, Bitcoin has struggled with the $50,000 level. This is a market that is trying to get above that $50,000 handle, but it may take a couple of attempts to actually make that happen. After all, we have recently seen another impulsive move. I think Bitcoin will continue to find buyers underneath, and pullbacks should be offered as buying opportunities. The $45,000 level underneath should be significant support, as it has shown itself to be so for the last couple of days. Even if we break down below there, there is even more support underneath near the $40,000 level. In other words, there are plenty of reasons to think that the Bitcoin market will continue to go higher based upon the technical analysis alone.

On the other hand, we could simply turn around and break above the $50,000 level and kick off the next “majorly higher.” Keep in mind that the most recent move had a lot to do with Tesla buying $1.5 billion of Bitcoin, which in the end I do not know makes any difference. While a lot of the true believers will talk about how Bitcoin is “out of money”, the reality is that there is nothing sound about money that can gain 10% in the blink of an eye. You simply cannot transact with that type of volatility, so until the volatility stops, which ironically will get a lot of traders out of the market, it is difficult to imagine this actually being money.

What it is would be pure speculation. There is nothing wrong with that, but unlike everyone else, I am perfectly comfortable with the idea of speculating on something just because it is going higher. The future for Bitcoin is still unknown, despite that a handful of people will tell you they already know. The reality is that we are seeing bubble-like behavior in several asset classes out there, and it is not just Bitcoin. Looking at this chart, I think as long as we stay above the 50-week EMA, which is all the way down at the 33,000 region, you are looking for a buying opportunity. 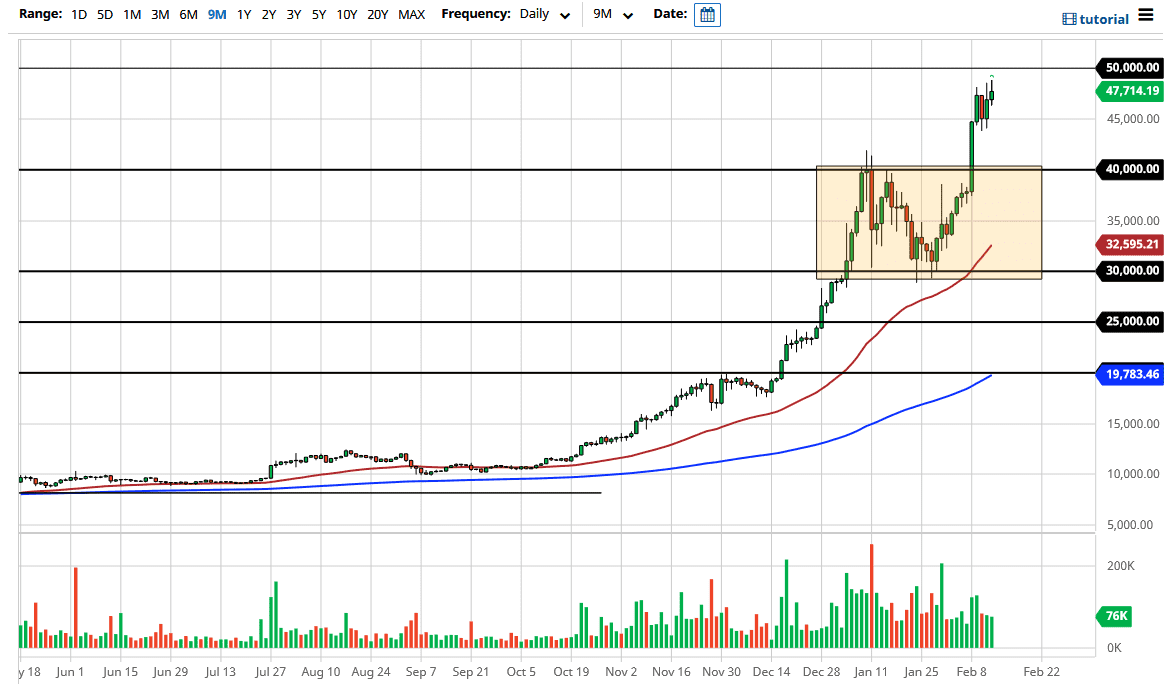